Read For Free Week 5: The Zombies That Ate the World, Megalex, and Basil & Victoria 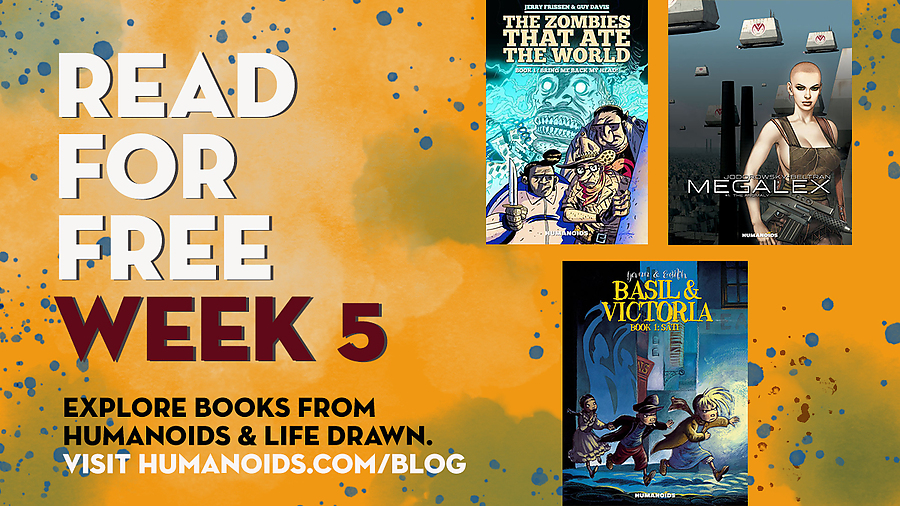 Even if you've been staring at the same four walls for the past five weeks, we're here to help you explore an orrery of exotic worlds. From a city-planet occupied by revolting police clones to a Victorian time capsule covered in chimney soot and charm, escape is only a click away.

From the feverish mind of Alejandro Jodorowsky (The Incal, The Metabarons), Megalex launches a near-endless stream of new ideas on every page, rendered with claustrophobic dread by French artist and musician Fred Beltran. This dystopian sucker-punch revolves around a tyrannical government that opposes all things natural, building a sprawling concrete and steel wasteland. Only a genetic anomaly and a passionate rebel can oppose this cruel industrial complex.

On a lighter note, The Zombies That Ate the World feasts on the corpse of the flesh-eating genre with wit and style. Legendary artist Guy Davis (BPRD, The Marquis) and writer Jerry Frissen (The Metabarons: Second Cycle) resurrect the ravenous undead, but instead of making a brain buffet out of L.A.'s populace, they attempt to rejoin society. For $500, Karl, Maggie, and Freddy will help dispose of the "life-impaired," even if losing limbs is an occupational hazard.

Finally, Basil & Victoria blends 1887 London with the Golden Age of cartooning, leading to a series of misadventures for two street scamps and their bulldog, Cromwell. Writer Yann and artist Edith produce a series of lithe reads steeped in the soot and gutter optimism of Dickens-era England.

Read The Zombies That Ate the World

If you enjoy these reads, you can find further volumes at comic book stores across the nation. Go to comicshoplocator.com to find the comics store nearest to you!