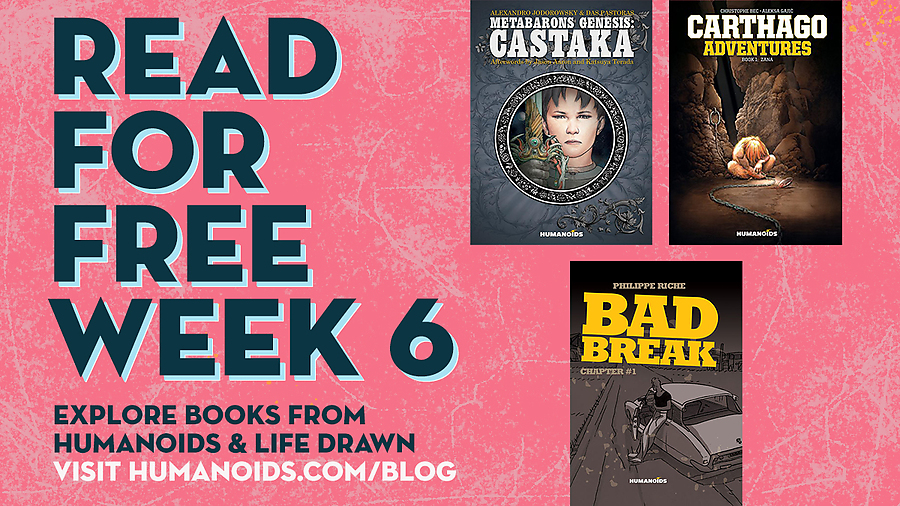 From deep space to the bottomless oceans to the gritty crime underbelly of Europe, Humanoids is venturing off the beaten path for another week of free reads. In all three instances, the stakes are huge and the risks crippling. And two of these graphic novels—Metabarons Genesis: Castaka and Carthago Adventures—offer perfect gateways into sprawling libraries designed to keep you entranced for weeks.

First, Alejandro Jodorowsky revisits his barbaric universe of technology puritans and survivalist space pirates in Metabarons Genesis: Castaka, illustrated by Das Pastoras. This prequel reveals the origins of the ferocious caste of miners who adopted Othon von Salza—the first Metabaron introduced by Jodorowsky and Juan Giménez in 1992. This history expands on the civil wars, bloodshed, and rise of the techno-techno authoritarian religion that would soon flex a circuited fist around the galaxy.

Next up, Carthago Adventures expands on Christophe Bec's mythology of cryptids and prehistoric beasts lurking in deep ocean trenches and secluded mountain ranges. Bec and artists Jaouen and Drazen Kovacevic follow the paths of Donovan and billionaire Wolfgang Feiersinger as they hop the globe in pursuit of long-thought extinct secrets. Carthago Adventures is perfect for fans of the blockbuster cinema from Steven Spielberg and Ridley Scott, weaving a dense tapestry of action, character, and mystery with every page. If you enjoy Carthago Adventures, the first two volumes of Carthago are currently available.

Finally, Bad Break escalates the tension on a much more intimate scale in an atmospheric noir from cartoonist Philippe Riche (The Alliance of the Curious). An antique dealer, a junkyard worker, and an adult film actress unite to follow the trail of a long-dead sailor; many, many bad things happen.

If you enjoy these reads, you can find further volumes at comic book stores across the nation. Go to comicshoplocator.com to find the comics store nearest to you!