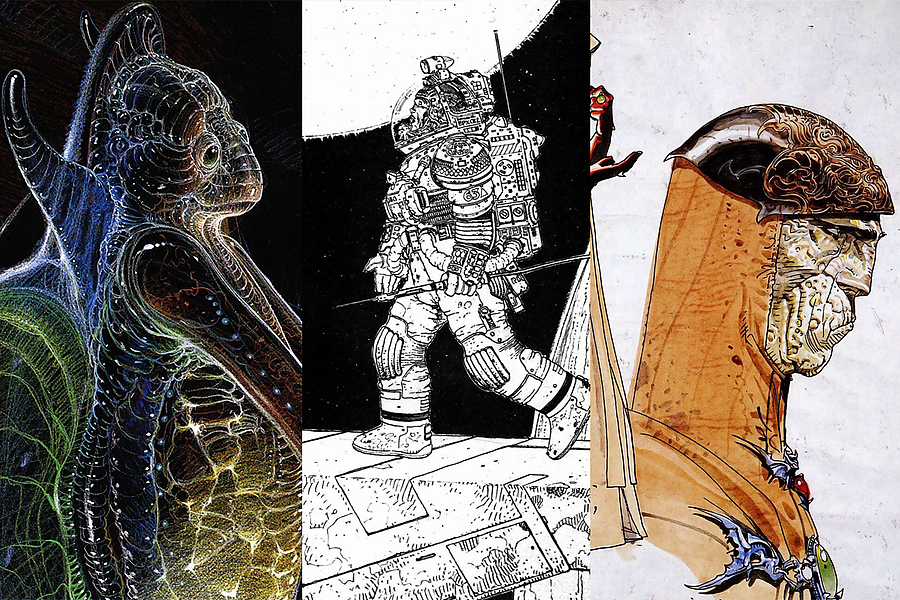 Mœbius, born Jean Giraud, pushed the boundaries of what sequential art could be from the '70s to the '90s, introducing a new degree of sheer wonder and awe to the medium. Each of his planes—background, midground, and foreground—packs the same degree of intricate detail. These pages deserve to be studied, not read. When crafting planets and cultures throughout his oeuvre, he introduced more information in one page than many comics contain in an entire issue. His collaboration with Alejandro Jodorowsky, The Incal, stands as his high-water mark in sheer, transgressive imagination—a barrage of new sci-fi noir ideas in every panel.

In his foreward to the book, writer Brian Michael Bendis noted that "there is literally whole sections of this work that have been lifted whole cloth and put into major motion pictures..." Bendis isn't wrong—in few historical instances does a creator birth a visual language so original that imitation is inevitable.

Fortunately, a community of genre filmmaker royalty did hire Mœbius to fuel some of the most original science fiction and fantasy films of the 20th century. The below list highlights Mœbius' contributions, which often included concept art with a few instances of writing. We're specifically focusing on key cinema works where the artist was hired to contribute or, in the case of Heavy Metal, had his work adapted. So while Mœbius' may have designed the Viper probe droid in Star Wars: The Empire Strikes Back, the design was incorporated (allegedly with permission) post creation. Also: we're fully aware that his name appears in the credits of Space Jam (we've yet to encounter any of the art he provided), and we're tastefully omitting a '90s movie that shares a majority of its name with The Fifth Essence—the fifth book within The Incal.

And since we're celebrating Mœbius' birthday on 5/8, we're offering The Incal to read for free until 5/13. Click here to dive into the feverish world of lapsed private investigator John DiFool as he discovers a mystical artifact with the power to alter reality—and make sure to read the rest of Mœbius' transportive oeuvre. 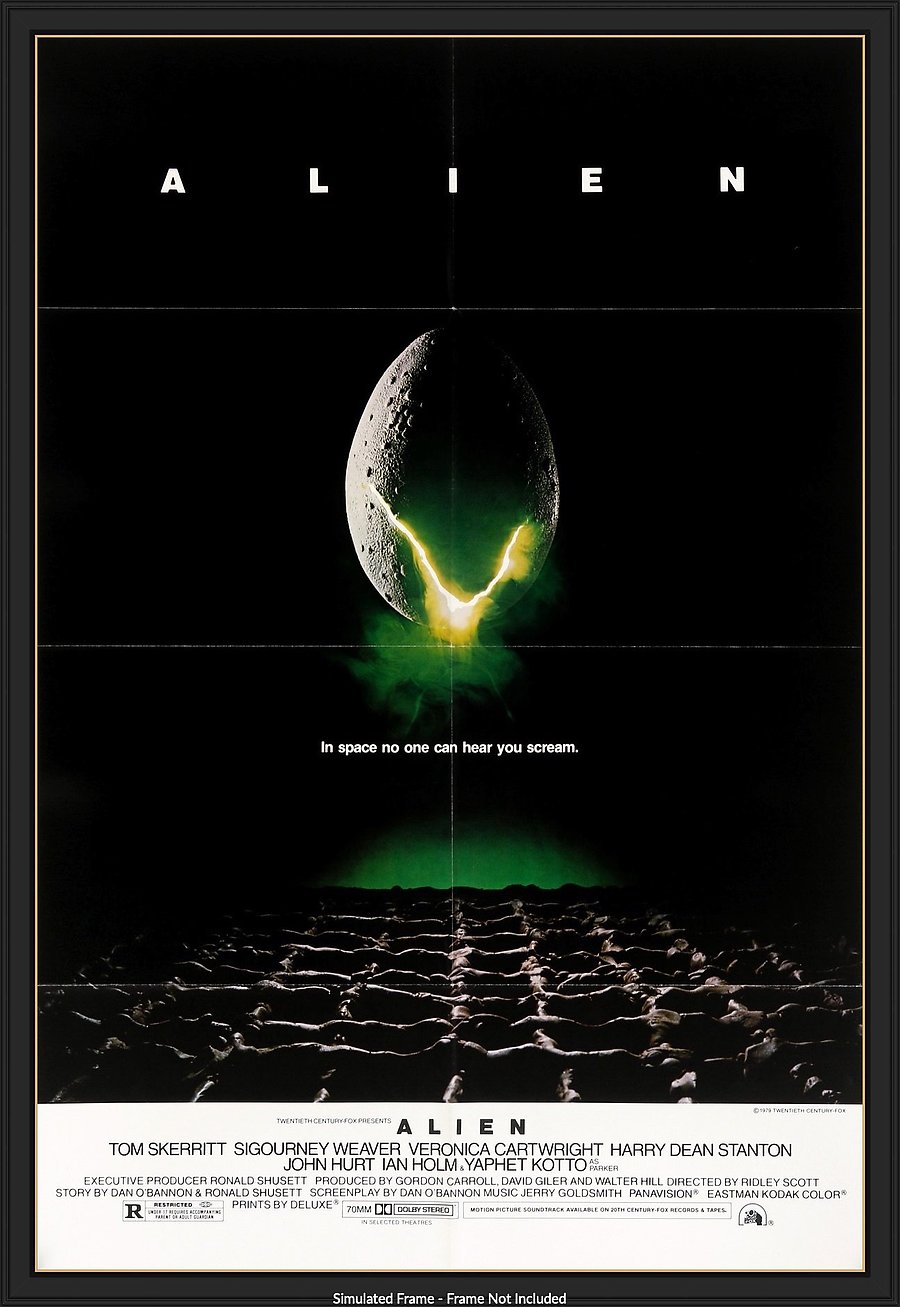 Mœbius' inclusion in Ridley Scott’s game-changing horror staple served as a reunion between him and writer Dan O’Bannon. Both had met in preproduction for Alejandro Jodorowsky’s Dune in 1974 and collaborated on The Long Tomorrow series in Metal Hurlant. Studios balked at Jodorowsky’s avant-garde vision and its hefty price tag (the ordeal is charted meticulously in the 2013 documentary Jodorowksy’s Dune). Mœbius and O’Bannon were still able to channel their grandiose vision in this scrappier endeavor, which had a budget of $11 million.

Ultimately, much of Alien’s design belongs to H.R. Giger, another veteran of the interrupted Dune production. The Swiss painter and sculptor crafted the xenomorph’s horrific aesthetic with dark motifs of human sexuality and organic sprawl. That said, Mœbius’ contributions are unmistakable. The artist created an array of costumes and derelict space ships marooned on distant planets. That sense of lonely, majestic immensity bleeds through the crew’s visit to planet LV-223, as well as the dense tech-heavy instrumentation and space suits of the doomed crew. 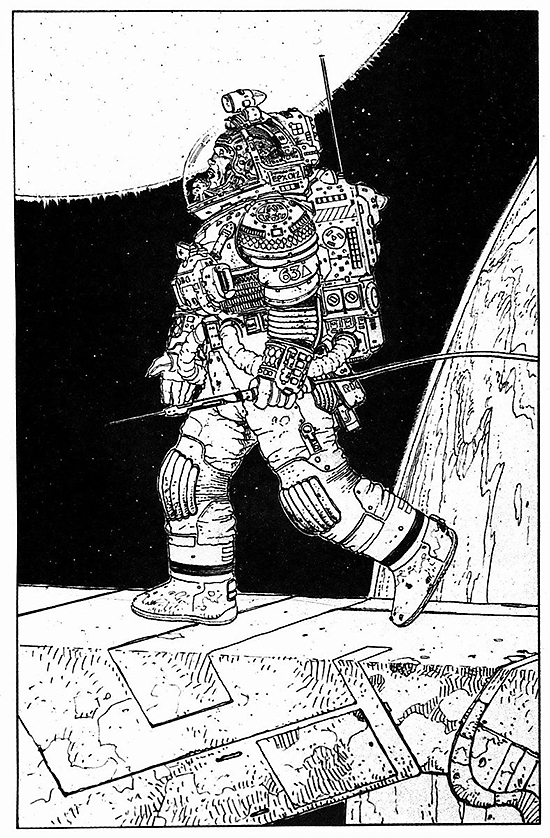 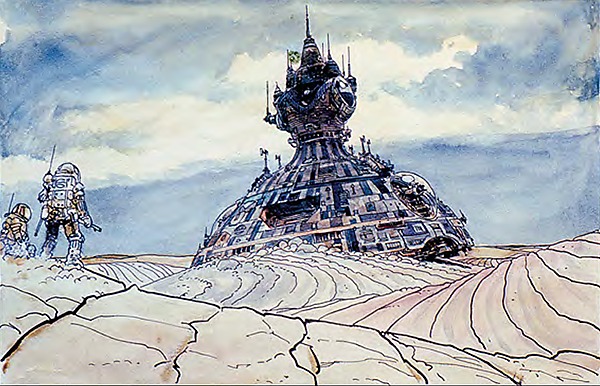 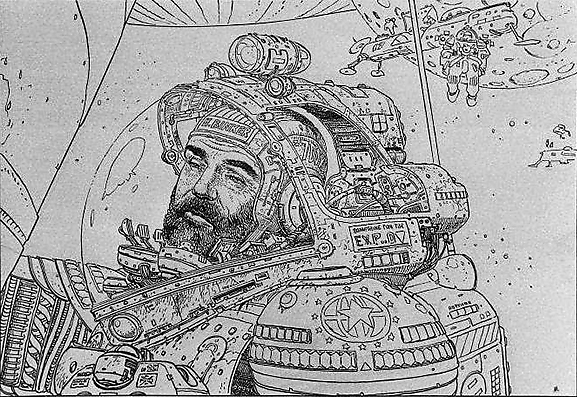 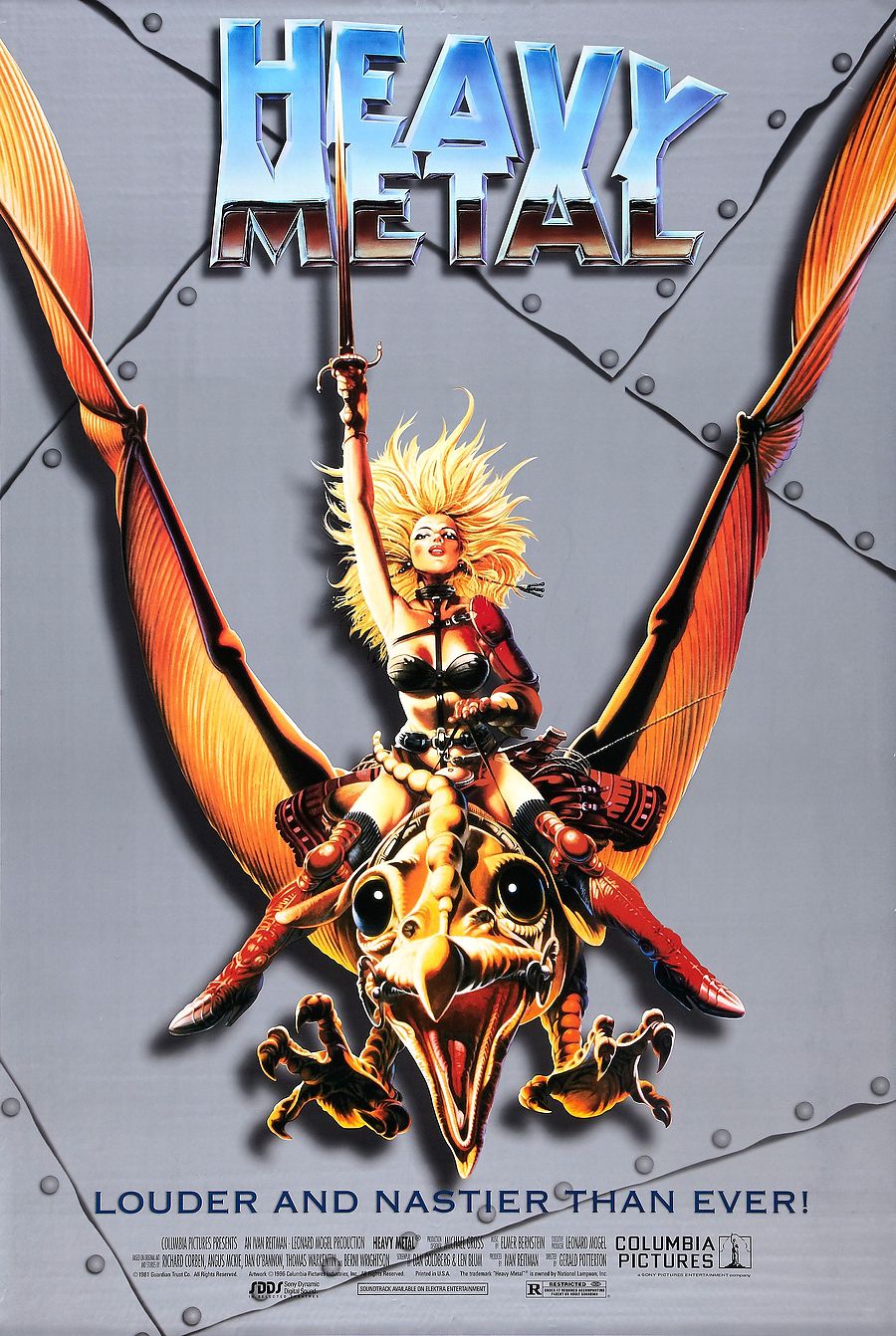 We’re cheating a bit here: Mœbius may not have lent his direct involvement to the animated anthology, but his DNA is baked into the film by design. Mœbius co-founded Les Humanoïdes Associés in December 1974, debuting the trailblazing sci-fi/fantasy magazine Metal Hurlant the month after (including the debut of Mœbius' pterodactyl-riding antihero, Arzach). Two years later, the editorial crew responsible for National Lampoon translated many of those cartoons for an English-speaking audience through Heavy Metal magazine.

The film that followed borrows liberally from Mœbius’ library. The segment Harry Canyon was inspired by the two-part Metal Hurlant series The Long Tomorrow, written by Dan O’Bannon and completed during the Dune preproduction years. Similarly, final segment Taarna is Arzach in everything but name, as a lone figure careens around a desert landscape on a pterodactyl-like mount. 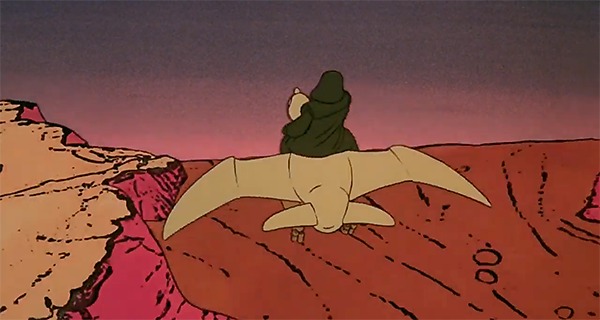 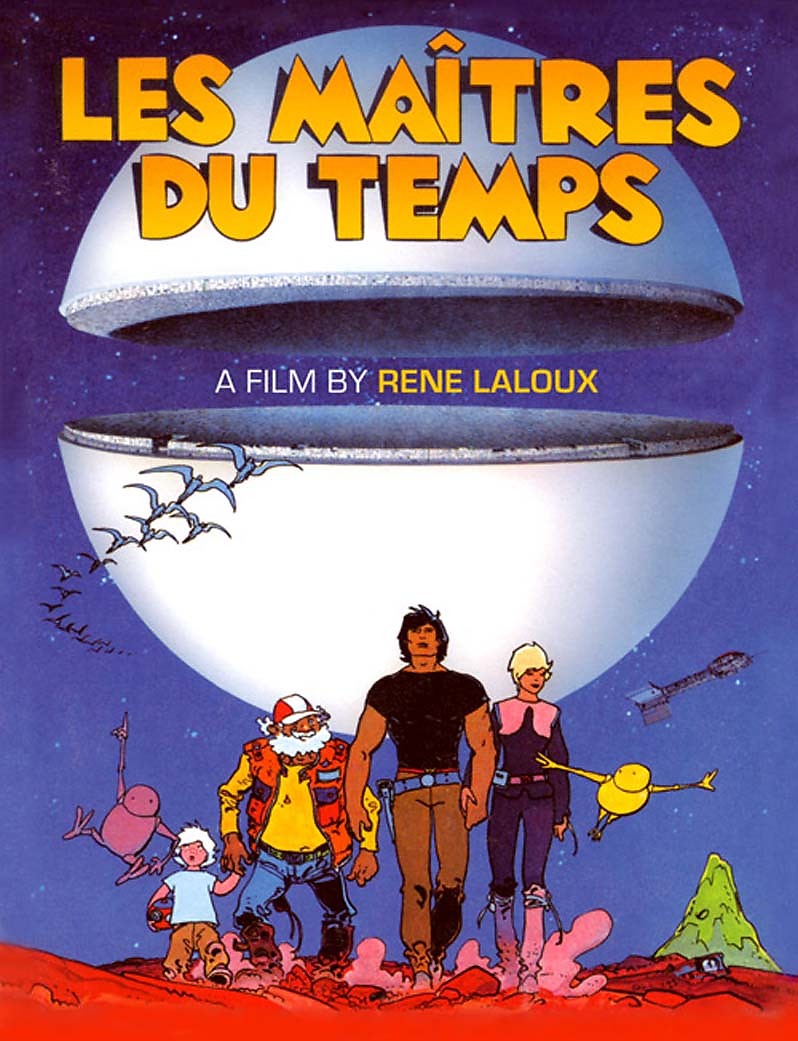 Known as Les Maîtres du Temps in its native France, Time Masters not only revels in Mœbius’ otherworldly deserts and striking color palette, but he also carries a writer’s credit in the animated feature. Based on the 1958 novel The Orphan of Perdide by Stefan Wul, the plot revolves around a young boy, Piel, who awaits a space pirate to rescue him on a barren planet filled with vicious, oversized wasps. The plot assumes the same decompressed, tone-poem rhythm as Mœbius tentpoles like The Airtight Garage. The plot doesn’t aggressively surge forward as much as invite the audience to seep in its bizarre and exotic journey, including a planet of faceless angels. 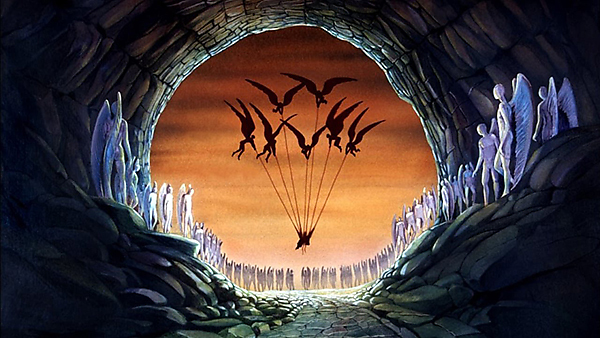 Disney's Tron stands as a milestone in combining technologies—it’s transdisciplinarianism defined. Director Steven Lisberger merged live action, computer generated imagery, and backlit animation to achieve an alien, anti-septic vision of cyber culture in the early ‘80s, all filtered through a lens of neon psychedelia. Mœbius’ designs added a new degree of ornamentation to what could have been far more minimalist under a different vision. His costumes flow and billow with protruding armor and compartments, laced in networks of circuits as distinct as a root system or tribal art. You could tell any of his designs by silhouette alone—most evident in the character Dumont. 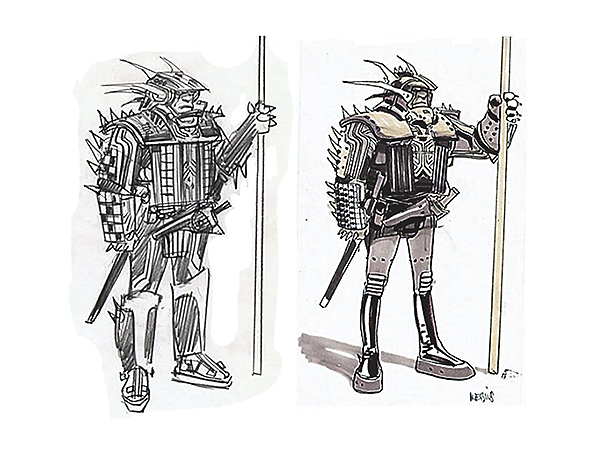 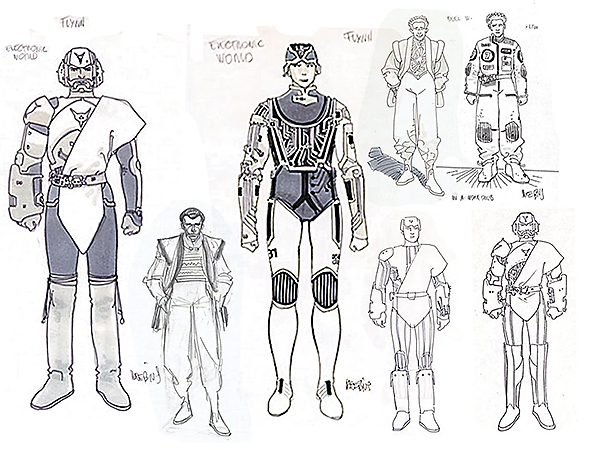 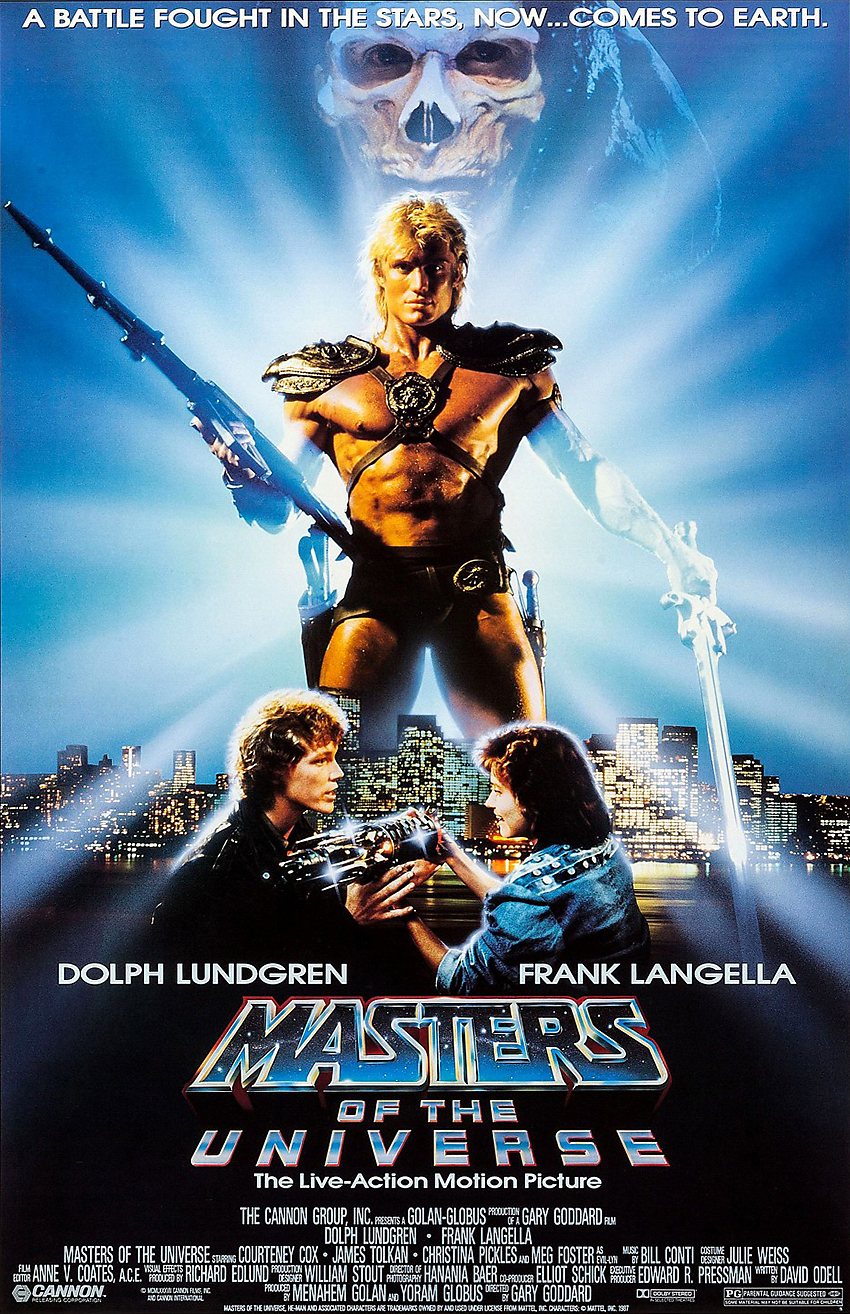 Masters of the Universe may be remembered as a nostalgic footnote—a post-Star Wars B-movie created to revitalize a languishing line of action figures. (Caveat: Frank Langella plays the hell out of a living skeleton god). The lone bright spot? Some truly stunning designs from Mœbius, whose influence can most be seen in the segments that take place in the fantasy realm of Eternia—Skeletor’s regal court, especially. The look can best be described as utopian barbarian for the heroes, and fascist dungeon chic for the villains. That elegance and exaggeration are on full display in the Mœbius’ concept sketches, even if it never fully translated to the finished film. 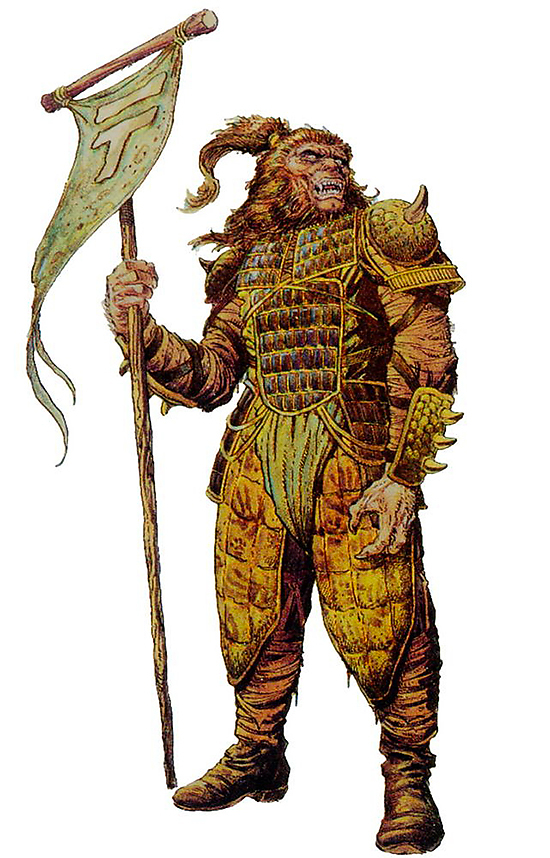 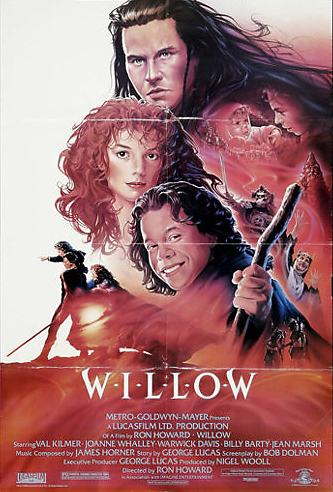 George Lucas pivoted from his space opera foundation in 1989 to the other end of the genre spectrum with Willow. Lucas created the storyline with Ron Howard directing the epic of a diminutive village farmer (and novice magician) tasked with protecting a baby with a profound destiny. The full-blown fantasy stood on the foundation laid by J.R.R. Tolkien and, as with Star Wars, Akira Kurosawa, albeit the influence was much less overt without a reference as distinct as The Hidden Fortress. Lucasfilm hired Mœbius for a stack of designs, and he delivered a treasury of transportive, lush, and immaculately detailed concept art. Appropriately, Mœbius' vision borrowed much more from Eastern culture than the Celtic/Western-European base that inspired Tolkien and C.S. Lewis. Mœbius' sketches embraced theater masks, flowing robes, and katanas. We can speculate that this was the reason none of Mœbius gorgeous work survived into production, with the filmmakers following the traditional aesthetic of tunics, armor, and broadswords. 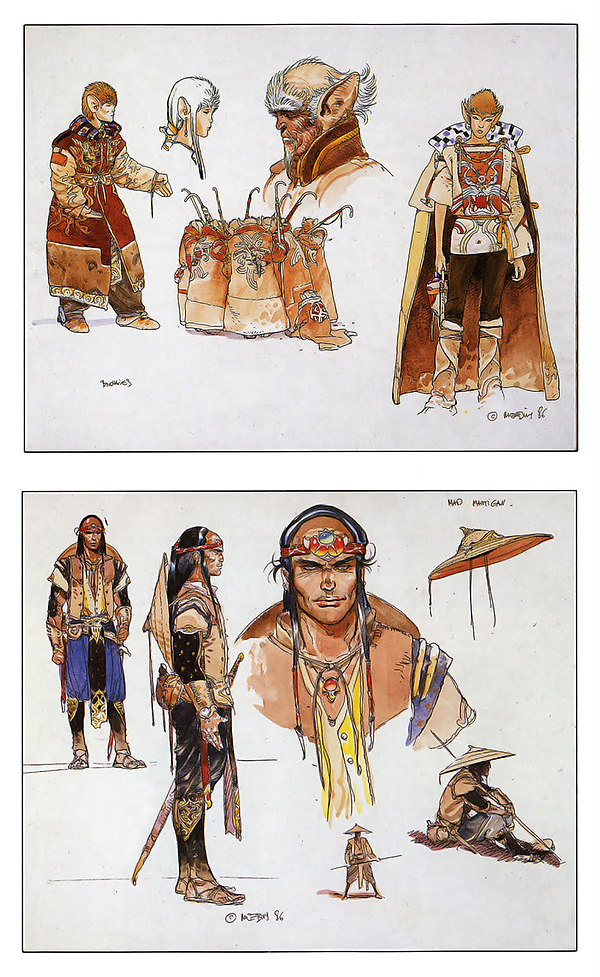 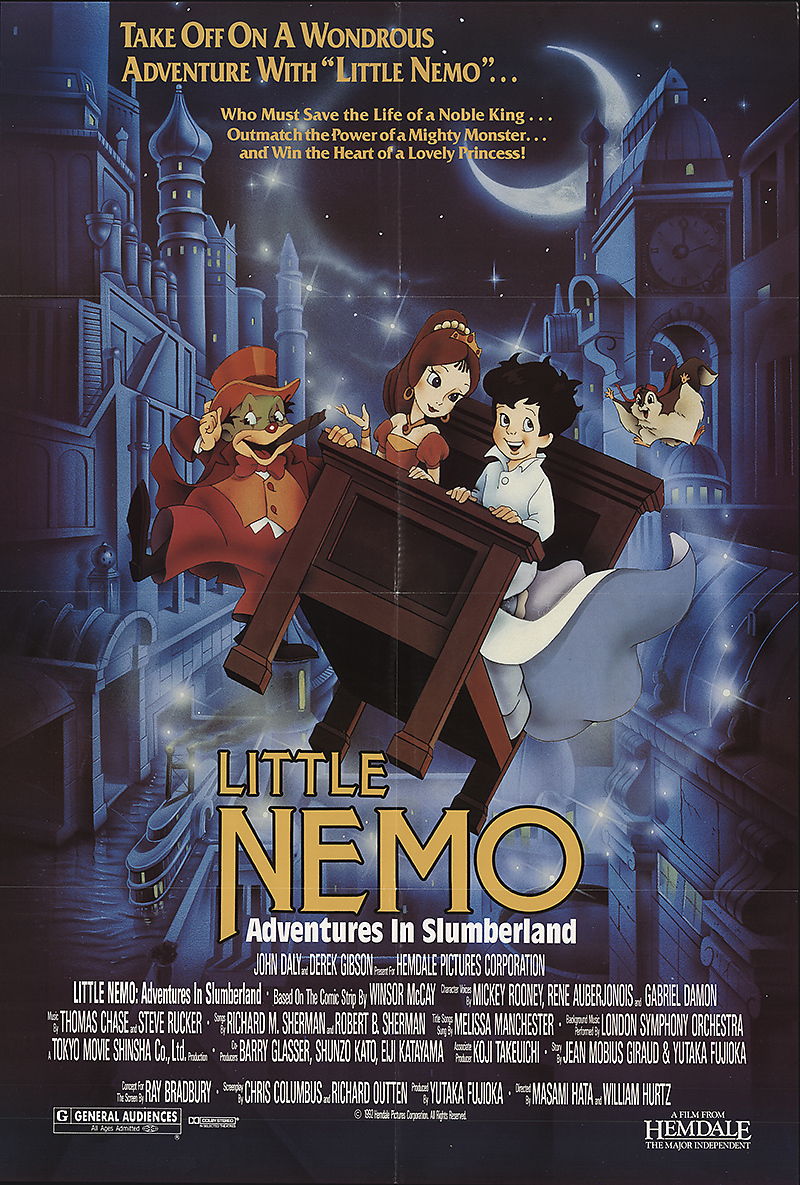 Winsor McCay's Golden-Age comics finally made it to the silver screen 81 years after their introduction, courtesy of a Japanese/American production with a turbulent history. The project cycled through a treasury of the most imaginative filmmakers of this (or any era), including Brad Bird, Hayao Miyazaki, and Harry Potter cinema helmer Chris Columbus. Mœbius lent his own genius, penning a draft of the script as well as providing concept art. The resulting film, directed by Masami Hata and William Hurtz, is more a creative buffet than a singular vision, but Mœbius' grandiose, surrealist innovation can be seen in the corners of this overshadowed production that competed in the same year as Disney's The Little Mermaid. 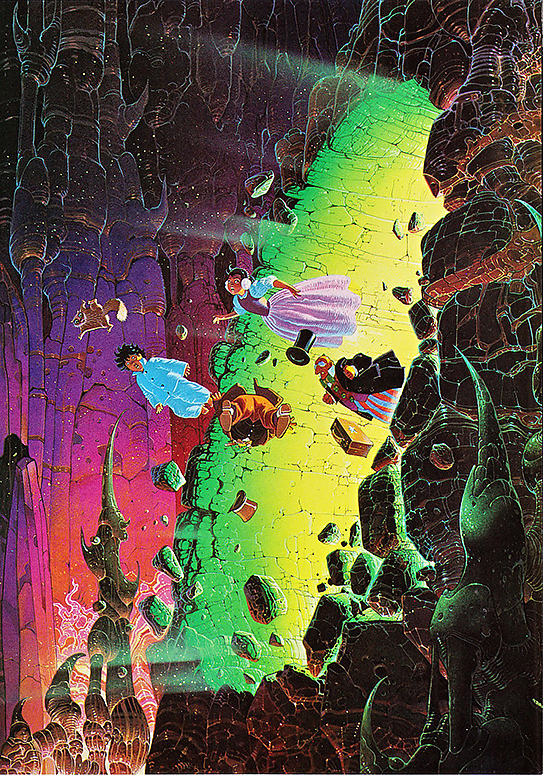 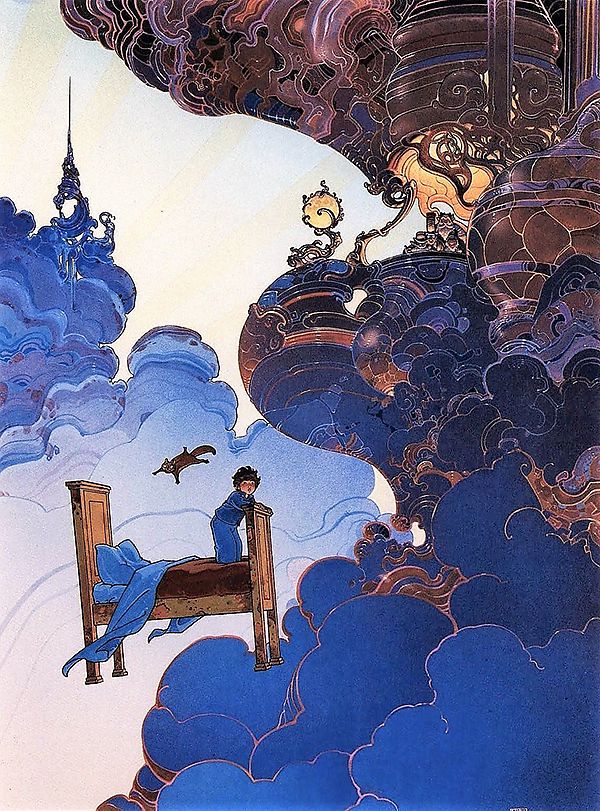 James Cameron recruited Mœbius to help design the "non-terrestrial intelligence” in his underwater opus about a SEAL team on a submerged drilling platform. Translucent, bioluminescent, and strikingly beautiful, the concept sketches absolutely fuel the end designs, from the color scheme to the proportions and textures. 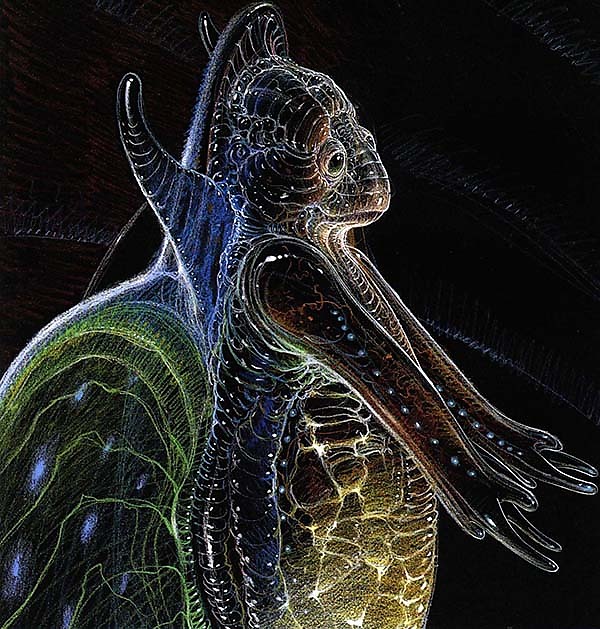 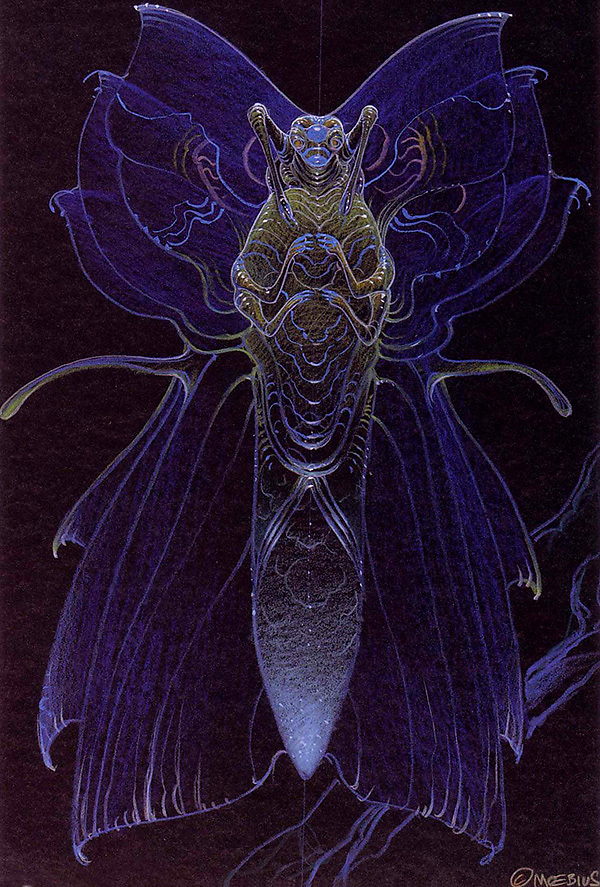