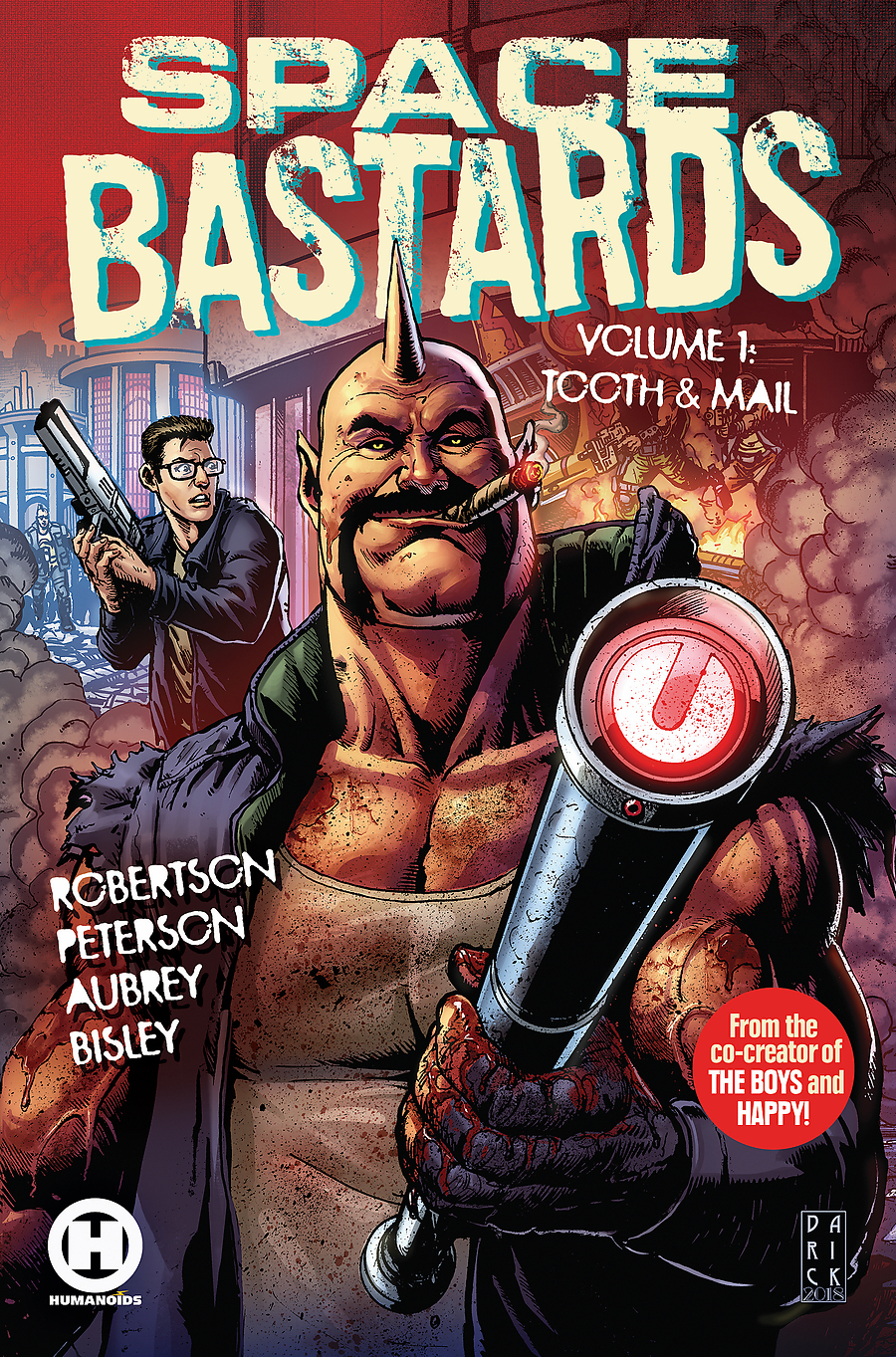 While you've been chomping at the bit, the Intergalactic Postal Service has been knocking teeth out left and right!

But you can finally relax because Space Bastards Vol. 1: Tooth & Mail has arrived!

And for those of you who have no f*cking clue what we're talking about, climb aboard and discover the series critics are calling "a Looney Tunes-esque parade of debauchery and dynamism!"

In the future, unemployment and job dissatisfaction are sky-high. When you’ve got nothing left to lose, you join the IPS.

Its postage fees are steep—and they go only to whomever ultimately fulfills the delivery, making every run a comically violent free-for-all between the most ruthless mercenaries in the cosmos!

The interplanetary ensemble cast of Space Bastards, under the volatile leadership of Postmaster General Roy Sharpton, are constantly at each other’s throats trying to settle scores and earn big money. But when a rival corporation’s teleportation technology threatens to make their role in the galaxy obsolete, the Bastards must work together to preserve a job they’ve come to love. 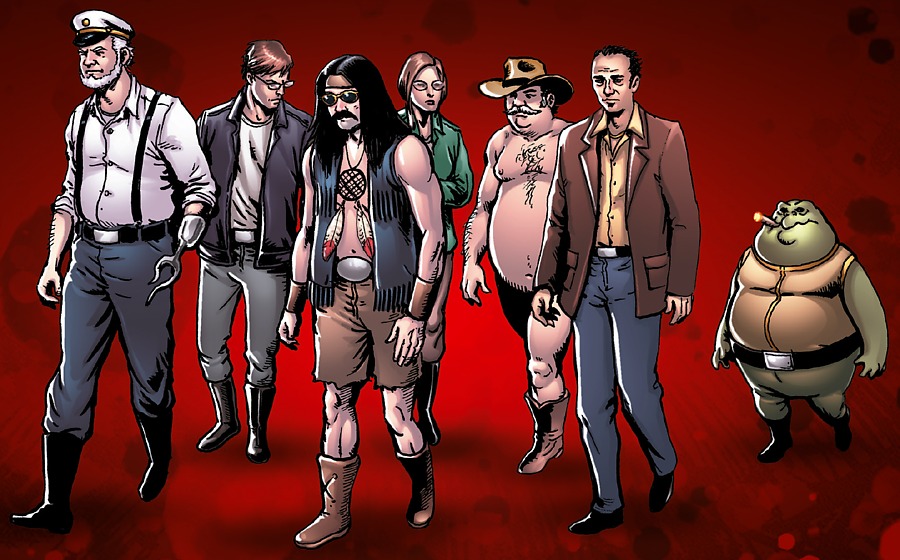 Check out this jaw-busting praise for the series:

“The future of the postal service is… out there. That’s the premise of Space Bastards, the comic book series about an Intergalactic Postal Service staffed by, shall we say, somewhat undesirable elements.” —THE HOLLYWOOD REPORTER

“Space Bastards is one of those comics I love because it's clear from the first page that everyone involved just turned the volume up to 11 right at the start and never once turned it down. The new Humanoids series from writers Joe Aubrey and Eric Peterson and Darick Robertson is filled to bursting with the kind of manic energy its title and cover suggests, and if you're looking for a mature readers sci-fi thrill ride, look no further…. This book is a blast.” —SYFY WIRE

“A series of surreal and often bloody vignettes by some of the best artists in the business…. A Looney Tunes-esque parade of debauchery and dynamism, as these artists work their magic to produce a comprehensive, and quite crazy, portrait of a universe gone mad.” —SCREENRANT

“Exciting… A celebration of cosmic badasses and deathmatch style dystopian adventures, Space Bastards provides plenty of thrills…. If you're a fan of The Boys, Space Bastards definitely is a sci-fi heir apparent and is quickly shaping up to be a good time.” —CBR

“Tarantino like….Who better to bring their story to life than The Boys’ Darick Robertson? If there is anyone who could depict this brand of action mixed with touches of humor and the aforementioned over the top violence, it is Robertson. And man does he come through.” —GEEK VIBES NATION

“New planets!, corrupt governments!, aliens!, dinosaurs! and blatant sexuality!. That hologram naked lady newscaster was interesting… This first issue is chock full of the best kind of insanity. I am dancing in my seat waiting to see what comes next. This has totally hooked me, and if you need a laugh, it’ll hook you too!” —FANGIRL NATION

“Robertson brings all of his famous grit and gore to Space Bastards...Space Bastards is about as crazy as it sounds. It’s a blood-splattered charge across the galaxy, with lots of parcels to deliver.” —MONKEYS FIGHTING ROBOTS 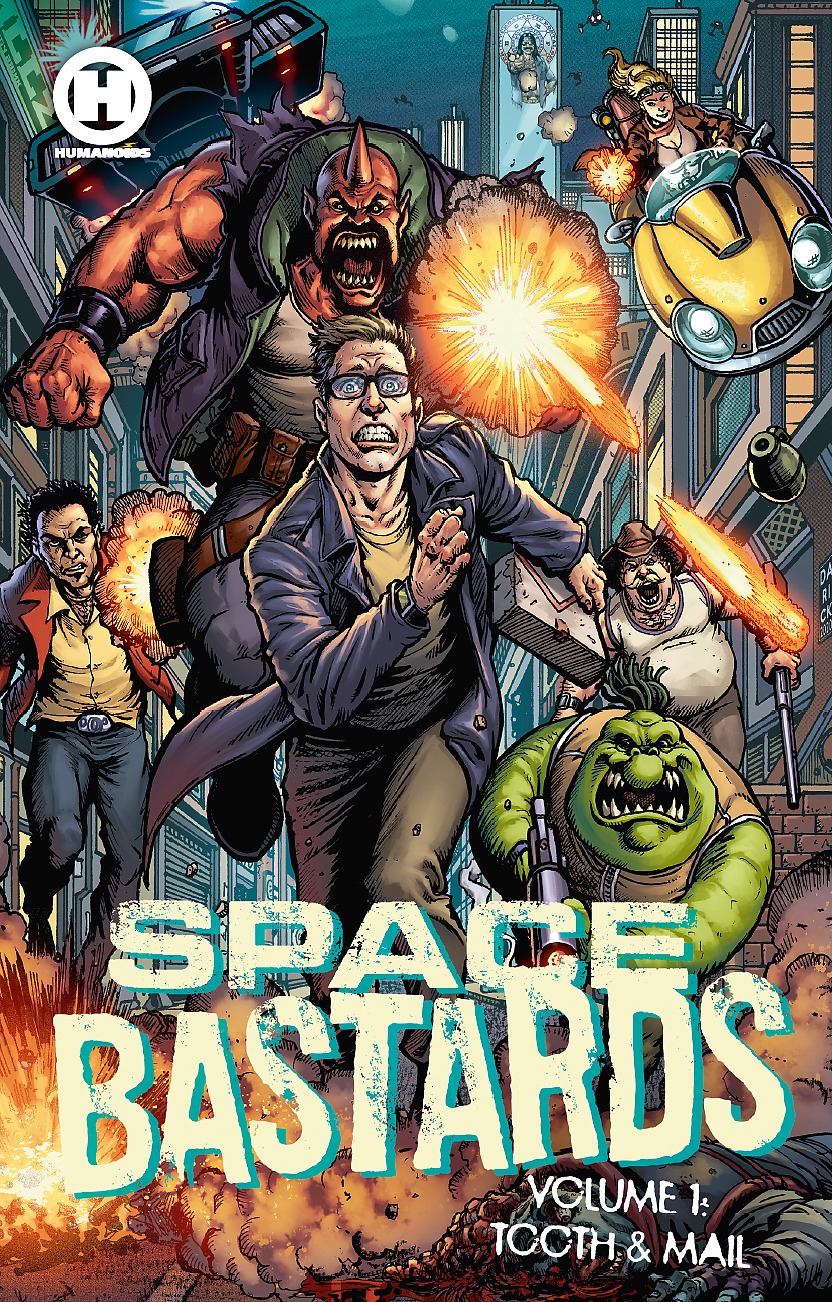 “Robertson brings all the raunchiness, chaos, and hilariousness that made The Boys such a great series to Space Bastards…. Space Bastards is a gut punch parcel ride that makes you laugh and keeps you guessing until the end.” —AIPT

“45 pages of sheer adrenaline, of gritty action-packed sci-fi storytelling…. The year is early, but I already have Space Bastards pegged as one of my most surprising and exciting new series of 2021.” —COMIC BOOKCASE (9.5 out of 10)

“Fun and gruesome. If you like over the top action sequences, then this may be an enjoyable book to pick up.” —MAJOR SPOILERS

“It’s REALLY over the top. The blood flies. The heads splatter. The violence is ultra… Space Bastards #1 is a lot of fun.” —GRAPHIC POLICY

“A glorious grim, gritty and darkly humoured debut… A brash, ballsy book with a dark and satisfying humour running through it, with not one but two revelations at the end that should have you hungry for more.” —COMICON.COM

“A rip-roaring fun story… An utterly bonkers action romp with a wildly unique premise and a legitimately engaging plot beneath its surface appeal. Give the Big 2 a break and check out this amazingly fun comic!” —COMIC WATCH

“Interesting to say the least…. an original concept with a lot of violence and action to get your teeth into.” —IMPULSE GAMER
“Prepare to be transported to a wild futuristic world where package delivery is literally a cutthroat business. Do not miss it.” —SPARTANTOWN

“Space Bastards #1 is an action-packed sci-fi read that will draw in readers with its splendid display of unapologetic use of gore and black humor. The first issue introduces a fun world to explore and eccentric characters to follow but wastes no time to make the exciting action take lead in the story. If you like gruff, morally questionable heroes, then you might be a fan of these bastards.” —EVERYTHING ACTION

“Think of this comic as Repo Man thrust into a blood-drenched, thematically-layered action story like Tarentino's The Hateful Eight. … Space Bastards is a brilliant — and hilarious — social commentary about present-day capitalism. … Peterson and Aubrey deftly fashion a volatile and expansive universe that Robertson and Rodriguez supplement with innovative artistry. … Amid the unabated savagery and mayhem, Space Bastards #1 emerges as a masterclass in using brazen humor to elevate its profound storytelling.” —COMIC BOOK YETI

“Sensational… Some of today’s hottest creators unleashing some insane storytelling… The interiors here are mindbogglingly brilliantly rendered. … This is the kind of crass, brash and over-the-top foul mouthed kind of story that simply cannot be resisted... unbridled fun.” —READING WITH A FLIGHT RING

“Darick Robertson does not disappoint with this vision into a bleak and brutal future.” —DROP THE SPOTLIGHT

“Entertaining as hell… Space Bastards is already proving to be a lot of fun in all its sci-fi action, violence, maiming, and profuse usage of adult language that is sure to keep readers entertained and wanting to see more of how this story turns out. … With the added bonuses of a very well-written futuristic story that still manages to remain grounded in the real world, a presence of dark humor to add to its entertainment value, action-packed and oftentimes brutally violent sequences represented perfectly, right down to facial expressions of all kinds to boot... I thoroughly enjoyed every page.” —DROP THE SPOTLIGHT

“If you enjoy irreverent humor and great art in the Humanoids tradition, you should really be reading this book.” —CONSKIPPER

“Writers Peterson and Aubrey create a character that is part Carnival Barker, Wrestling Promoter, and Snake Oil Salesman with a…dare I say it, Stan Lee charm. … As the quote goes: ‘Some are born great, some achieve greatness, and some have greatness thrust upon them.’ Well when it comes to the art of Darick Robertson, they all apply. He is a master of the kind of insane over the top action that Space Bastards embraces. Robertson brings the world of the Space Bastards to life with in your face confrontations all drawn with maniacal glee.  Add it all together and it equals a twisted fun that you can’t help but smile at…even when people are getting decimated.” —GEEK VIBES NATION

“Off the wall bonkers in the best possible way... It’s worth taking your time to pull every bit of magic out of these pages. … You should definitely grab it up.” —FANGIRL NATION