The Swords of Glass
Softcover Trade 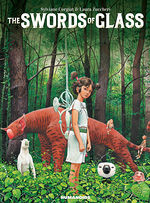 The Swords of Glass
Softcover Trade

In a world whose time is running out, four mysterious swords must be reunited to save the planet. A spectacular saga full of wondrous creatures and settings.

In a world threatened by the imminent death of its sun, young Yama lives a relatively happy and peaceful life as the daughter of the chief of the village. But everything changes the day a sword of glass falls from the sky, just as the prophecy had announced. Anyone who touches the sword is instantly turned to glass and dies. Orland, the local lord of war, comes to take possession of the unique weapon but fails to retrieve it. In the process, Yama’s father is killed and her mother taken away. Yama, however, escapes and survives with only one thought: when she grows up, she will return to get the sword of glass, and avenge her parents. 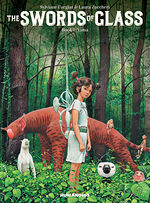 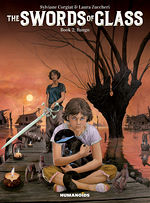 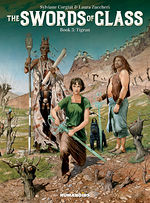 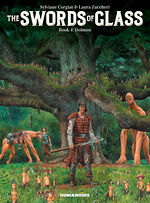 The Swords of Glass ought to have an appeal well beyond the market for fantasy comics, and those averse to the genre should instead consider it adventure. While not quite all-ages, no content exceeds the levels of disturbance for those who read teenage fiction. Those really taken with the art might want to consider the pricier oversize edition.

I like the fact she takes Science Fantasy to heart and manages to steer away from the clichés found within fantasy plot-lines by adding the science fiction element to her story through the creatures she creates to populate her world in which The Swords of Glass takes place.