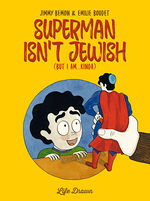 Humorous, timeless and universal, this personal and poignant story of acceptance and understanding shows how we all must learn to love the hero within ourselves.
Extrait
Amazon Barnes & Nobles IndieBound Powells SimonSchuster Comic Book Locator 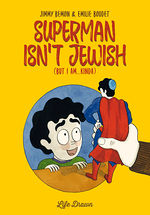 “Pop culture and ancient religious icons get mashed up to humorous and heartwarming effect in this charming graphic memoir of a boy trying to reconcile the identity he was born with and the identity he’s built for himself…. The dynamic duo of Bemon and Boudet have brought to the page an intimate, entertaining, and truly universal exploration of personal identity. ”

"The full color illustrations by Boudet are bright and cheerful...recommended for synagogue and school libraries."

"...his internal conflict is something that all readers will recognize."

"...an impressive graphic memoir that explores self, religion, and pop culture. The story by Bemon is heartfelt, humorous, and relatable. The art by Emilie Boudet transports the reader to a different world. Altogether, it’s a story which gives readers affirmation that being different is a superpower. "

A humorous, poignant journey of acceptance and learning to love the hero within ourselves.

"Humorous, timeless and universal, this personal and poignant story of acceptance and understanding shows how we all must learn to love the hero within ourselves."

Inspired by the authors’ personal experiences, this book is more than just another graphic novel about religion. It echoes our own most intimate questions and depicts, in a light-hearted way, our society and its many constraints. The two authors humorously tackle contemporary, yet timeless and universal topics. (Translated from the French - Olivia)

Neither proselytizing nor unnecessary, Bemon’s analysis is conducted with the right amount of distance, in a secular and cheery way. . . Émilie Boudet’s artwork is moving, simple, and modern all at once. (translated from the French - Olivia)