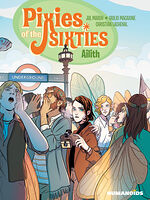 In the 1960s U.K., with Swinging London underway, fairies enter the light of day! Two fables of modern folklore from contemporary comics masters!

Anann: The story of a young fairy who, drawn by the lights of Swinging London, leaves her forest to pursue her dreams of becoming a singer. She meets Stella, a human with whom she quickly falls in love. But her lover’s disappearance will make Anann realize that beneath the glitz and glamour of the city, rejection is only a tiny part of what awaits her...

Ailith: When she arrives in London to investigate a case of missing persons linked to a strange rite, Ailith gladly accepts help from her childhood friend, Elliot, a police officer who expresses clear Anti-fairy opinions and blames them
for all the major problems in London. When the investigation entrusted to Ailith leads her to the heart of the forest, she makes a most disturbing discovery, uncovering with it a deeply buried wound. 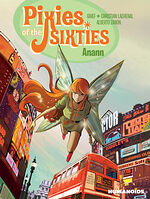