We are thrilled to announce that Luisa Now and Then has been selected as an Honoree for the Stonewall Book Award-Barbara Gittings Literature Award!

The Stonewall Book Award is a set of three literary awards that annually recognize "exceptional merit relating to the gay/lesbian/bisexual/transgender experience" in English-language books published in the U.S.

Have you heard of Hedy Lamarr?

Maybe you've seen her in the classic film "Samson and Delilah." Whether you've seen her before or not there is no denying one thing, she was stunning. Commonly known as "The Most Beautiful Woman in the World" she soared to fame on the silver screen in the 40s and 50s.

But Hedy Lamarr wasn't just a pretty face, she was also a genius.

As an amateur inventor, she helped Howard Hughes increase the speed of his planes and tinkered with her own creations. One of her creations was frequency hopping. This tech helped the U.S. win the war as well as becoming the basis for modern technology (you know, little things like Wi-Fi and Bluetooth).


The gorgeous graphic novel biography of the iconic star is now out from Humanoids. Still need convincing? Check out the reviews below!


"...the gorgeous comic from Humanoids is a celebration of the life and work of Lamarr." ― NERDIST 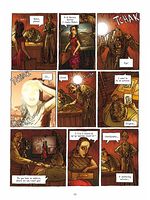 “Harrowing…. Evocative….While staying true to the real-life tale of Norma Jeane’s transformation to Monroe, this fantasy creates a rich imaginary world that pays homage to the struggles of the late actress.”
― PUBLISHERS WEEKLY

"On the outside, you wouldn't think of Marilyn Monroe's life as a horror movie. Redolfi makes a very convincing argument for why you should."
― COMICON.COM

“You may never look at a photo of Marilyn Monroe the same way again.”― SYFY

“An impressive and disturbing look at a world renowned sex symbol. There's an unsettling quality to Redolfi's artwork that fills you with paranoia, making you question every character's motives. This is a book that will stay with you for some time. At the bare minimum, it will make you think twice before hanging up that Marilyn Monroe poster you bought at Target.”
―  HORROR TALK 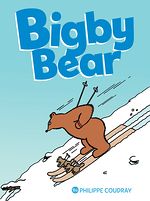 OUR FIRST TITLE IN OUR NEW ALL-AGES LINE BiG!

"A thoughtful and amusing choice for most elementary comics collections." - SCHOOL LIBRARY JOURNAL


“Accompanied by a rabbit friend, Bigby Bear conducts experiments and follows his innate curiosity on his quest to live a simple, fulfilling life. While Bigby Bear is fully appropriate for BIG’s younger target audience, [there is] the undercurrent of off-kilter comedy that should appeal to readers of all ages.” - PASTE MAGAZINE


“Clever…. The jokes in the comics play around with physics, the comics medium, wordplay, and more.” - GEEK DAD

1)What was your reaction when you found out Humanoids wanted to adapt your novel Downward to the Earth into a graphic novel, and potentially turn it into a movie?

A: Of course I was pleased. I want my work to reach the largest possible audience, in all media.

2) Did you know of the publisher Humanoids or the magazine it published in the 1970s, Métal Hurlant (which became Heavy Metal in the US), or some of its authors, such as Mœbius, Druillet, and Jodorowsky?

A: Yes, I knew about it. I visit France often and I saw METAL HURLANT in Paris in the 1970s. I did a little writing for HEAVY METAL back then, too,

3) You have said good things about Ridley Scott's Blade Runner (released in 1982). Philip K. Dick, although he never saw the completed film and died before its release, was reluctant about it. Is this also your general feeling towards film adaptations of novels and the reason why none of your books (apart from The Positronic Man, which you co-wrote with Isaac Asimov) have so far made it to the silver screen, despite the tremendous importance of your work?

A: I am quite willing to let film producers do whatever they want with my books. Movies and books are different art forms and have different requirements. When THE POSITRONIC MAN was being turned into a movie I visited the set several times, just to see what making movies was like, but I never tried to interfere with the concept of the movie. Many of my books and stories have been bought or optioned for movies, but only POSITRONIC MAN was filmed, though I hope some of the others will be done in the next few years. I certainly have not prevented the purchasers from making the movies – that is entirely in the hands of the decision-makers in their industry.

4) What do you think of the first volume of the graphic novel adaptation of your novel, by Laura Zuccheri (art) and Philippe Thirault (script)?

5) In the graphic novel adaptation, the artist chose to model the character of Kurtz off of you. What do you think of this choice?

A: I was amused and pleased, even though I myself am nothing like Kurtz, I hope. Of course my beard is white now – I am in my eighties – and people who don’t know what I looked like back then may not notice the resemblance. But I did right away and had a good laugh.

6) Do you read, or have you ever read, graphic novels and comic books? Are you or have you been interested in this form of storytelling?

A: I read comic books when I was a boy, seventy years ago, but not since. I occasionally look at some particularly beautiful graphic novel, especially French ones, but I am not a frequent reader of them.

7) You have been a pioneer in developing many aspects of science-fiction literature. Have you ever identified the source of your ideas, and your process of creation? Do certain ideas appear to you in dreams?

A: Absolutely. I always used my dreams in my stories. I wrote an entire novel – SON OF MAN – from my dreams. Each morning I would write the dreams of the night before into the new scene. I don’t write fiction any more but I still have dreams, very startling ones sometimes.

8) The SF of the 1960s had a mostly militaristic and colonizing approach to the discovery of new planets. Opposed to that, the SF of the 1970s, of which Downward to the Earth is part, denounces the alienation of the native populations, and encourages respect for other forms of life. According to you, how does today’s SF movement place itself in regards to these issues, or to any particular ideology?

A: I don’t read much science fiction any more and I am not the right person to be discussing modern trends in SF. From what I hear, though, current SF has a very strong ideological interest in those issues.

9) Downward to the Earth clearly brings up the problems linked to decolonization. Which geopolitical situation of the time most inspired you? The "Nildor" and the "Company" bring to mind British India, but there also appears to be allusions to the Vietnam War — is that correct?

A: Actually, no. I wrote DOWNWARD TO THE EARTH in 1969, when the US was still fighting in Vietnam, and I was opposed to our involvement in that war. But Vietnam was never an American colony. What inspired DOWNWARD TO THE EARTH was my visit to Kenya and Tanzania in 1968, where I saw at close range the effects of the withdrawal of a colonial power from an alien land.


10) Do you believe that science-fiction, more so than other genres, allows for easy audience escapism, as well as criticism of our own society?

A: It provides both. That has been the main aspect of science fiction since HG Wells wrote THE TIME MACHINE. There can be nothing more escapist than a voyage through all of time to come, but Wells also had a great deal to say about things like class warfare, etc. The best science fiction provides the social criticism enfolded within the escapism, one inextricably linked with the other.

11) Through the spirituality of the Nildoror and the Sulidoror, you show us that within them exists a deep and permanent connection to the universe, a gift that not all humans are naturally in possesion of, in particular in our Judeo-Christian society. However, many of the rituals that you created for the natives of Belzagor include references to religious concepts that are well known, such as hell, redemption and sins. Why did you make that choice?

A: I have no answer to this question.


12) People have often compared Downward to the Earth to Joseph Conrad’s Heart of Darkness; was this an intentional choice of yours?

A: Of course. I love Conrad’s work. So that there could be no doubt about the connection between his story and mine, I put Mr. Kurtz right into my book under that name.

13) Mœbius, one of the founders of Humanoids and one of the medium’s most legendary artists, illustrated a cover of your YA book Pendulum — do you remember it?

A: Yes, I remember Moebius and his work. I think he did the interior illustrations for PROJECT PENDULUM too. (It was all a long time ago !)