"A perceptive take, which celebrates and illuminates one of early television’s true artists."
– PUBLISHERS WEEKLY

"Twilight Man is a respectful but clear-eyed tribute to one of the most important and influential dramatists of the 20th century."
– ALAN BRENNERT, NEBULA AWARD WINNER

"Having experienced "The Twilight Zone" and "Playhouse 90" first hand, I fancied myself as pretty clued in to the Rod Serling legacy, but I admit I learned a lot from Koren Shadmi's unexpectedly poignant and cleverly observed graphic novel treatment of Serling's life and career. It's a unique take on the lasting work of a complicated man who found his greatest success when coding the messages of his socially conscious narratives into "a wondrous land whose boundaries are that of imagination"
– JOE DANTE

“Koren Shadmi expertly takes us into a dimension of incredible imagination. The life of Rod Serling is a great American story of determination and invention - and the perfect stuff of a graphic novel.”
– DAVID KUSHNER, AUTHOR OF MASTERS OF DOOM 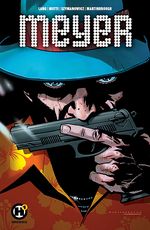 Everyone is raving about MEYER!

“This is a 120-page, darkly comedic coming-of-age quest stuffed full of hardcore Breaking Bad-style imagery amid a fictional biography of the legendary Jewish mobster Meyer Lansky as he attempts to organize his very last caper.”
– SYFY WIRE

“A different kind of gangster tale… Meyer is both funny and thoughtful, a story about aging, self-fulfillment, friendship, and legacies.”
– AiPT COMICS

Barbra Dillon chats with Little Badger about the inspiration behind the series, her creative process in working with the creative team, what she hopes that readers will take away from the series, and more!

"Strangelands #1 offers an interesting premise and hits the ground running with it."--OMNICOMIC 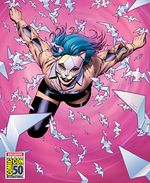 "Himari and her surreal powers visually lend themselves to the spotlight of a variant cover," Cassaday said of the cover. "The story of Ignited is fairly heavy and I wanted to remind the reader of the joy that these young characters are earning day by day, issue to issue." 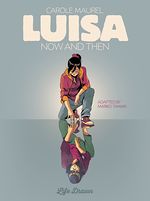 Luisa: Now and then

“A poignant time travel story with a queer romance angle.... Tamaki has significant experience exploring teenage characters in books like Skim and the Eisner Award-winning This One Summer, and she takes Nanette McGuinness’ translated dialogue and adapts it for an American ear…. Maurel and Tamaki take
these women on a powerful journey through their past and future.”—AV CLUB

“A stunning book. … Unique and sweet.”
— THE NERDIST

"A funny, touching, and beautifully illustrated and colored story about self-acceptance."―LIBRARY JOURNAL 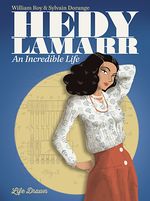 “Translated from the original French, the gorgeous comic from Humanoids is a celebration of the life and work of Lamarr, and it’s clear that the creators are huge admirers of the trailblazing inventor, devoting their story to her role in taking down the Nazi regime and inventing what would go on to make cell phones and the Internet possible.” ― NERDIST

“Of all the complex lives movie stars have lived, arguably none have been more complex, contradictory and fascinating than that of Hedy Lamarr, the so-called “most beautiful woman in the world” was was simultaneously the star of such films as Samson and Delilah and Boom Town and also the co-creator of work that would later be used in the creation of Bluetooth technology. A new graphic novel from Humanoids, Hedy Lamarr: An Incredible Life, tells the actor’s story anew, and in the process, brings her astonishing accomplishments to life once again…. [as] a fast-paced, fun biography.”
– THE HOLLYWOOD REPORTER

"...this graphic novel is wonderful. It’s a really accessible format that all ages can enjoy." ― FANGIRL NATION

"...a graphic novelization of her life from writer William Roy and artist Sylvain Dorange that you’ve gotta see."  ― io9 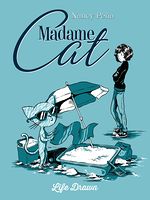 “Expressive and funny, capturing all the cat things we hate and love.”
― COMICS BEAT

"In these dark times, we could all use some furry distraction.”
― NEW YORK TIMES/VULTURE

"...true to life, brimming with the joy, frustration, humor, and love that comes with being a pet parent."
―FREAK SUGAR

"With narrative mastery, creator Nancy Peña has created something truly delightful and effervescent that will appeal to cat lovers of all ages. "
―THE PURRINGTON POST