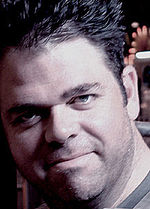 Thomas Fenton is an American screenwriter who grew up in Rochester, New York, whose writing credits include the screenplays for Saw IV and I Spit On Your Grave 2 and has also worked on other Saw films in the franchise. He began making sci-fi, horror and martial arts films in the 5th grade and later went to film school at Hofstra University. Before moving to LA to pursue a career as a screenwriter and graphic novelist, he owned and operated a successful commercial and music video production company. His first assignment in Hollywood was a rewrite on Stephen Seagal's Belly of the Beast, after which he wrote graphic novel series called Dominion and Army of Angels. Currently he is collaborating with 451 Media and Eli Roth / Jason Blum’s Crypttv.com on new media content as well as developing films and TV for legendary producer Robert Evans at Paramount Pictures.

Roman Surzhenko is a Russian comic artist, who was born in 1972. He graduated from the Taganrog State University Ofof Radio Engineering (TSURE) in 1994 and began his career working for publishing houses. In 2001 he created his first comic, called Magnificent Adventures, and has worked for the publishing house Advance-Press in Moscow since 2003. His Flight from Earth was also published in The Mammoth book of Zombie Comics by David Kendall. He created storyboards for movies like Revenge of the King, Prisoners of 3 Planets and Possibility of Vacation. In 2009 he succeeded Christian Hojgaard and Drazen Kovacevic as the artist for The Hounds of Hell, which was followed by Metal Vol.3 in 2010. He and writer Yann are responsible for the Les Mondes de Thorgal installments about Louve. In 2015 he also succeeded Giulio De Vita as the artist of the Kriss de Valnor.