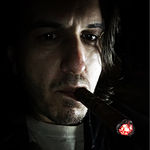 Eric Peterson is a comic book writer living out of the dusty mountains of Ahwatukee near Phoenix, Arizona. He is the co-creator of Space Bastards, which he considers his third child (the other two being actual breathing human children). Eric grew up making movies in his backyard. Space Bastards is what happens when a person does that for many years and then thinks, "What is the one comic we could create that surely would just be too uncanny for people to grasp or love?" Eric Peterson currently spends his time coming to terms with an audience actually grasping Space Bastards.