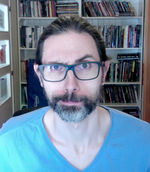 Hugo Petrus was born in 1981 in Menorca (of the Balearic Islands), where he enjoyed a childhood consisting of cartoons, books, movies, karate, and (above all) comics! After graduating with a degree in Psychology, he decided to change paths and pursue his dream of becoming a cartoonist. Since then, his work has been featured on the pages of Marvel, DC, Dark Horse, Humanoids, and IDW (just to name a few). Hugo still lives in Spain, where he's a proud husband, father, and cuddler of cats.