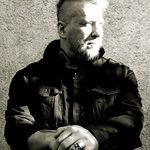 Simon Bisley is a British comic book artist best known for his 1990s work on ABC Warriors, Lobo, and Sláine. His style, reliant on paints as well as inks, was strongly influenced by Frank Frazetta and Bill Sienkiewicz, and took inspiration from rock album covers and graffiti as well as traditional comics art. While still a student, Bisley did a painting of a robot holding a baby that a friend passed to Pat Mills, and inspired him to relaunch the ABC Warriors strip, with Bisley as artist, in 1987. Bisley himself would soon influence a whole generation of artists for comics, illustration, games, and film.