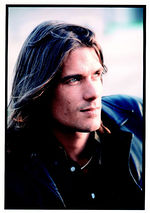 Born in 1971, Olivier Boiscommun studied Graphic Arts in Paris. Initially a fashion designer, he switched to studying Fine Arts in Angoulême in 1993. He created a story for the Enfants du Nil anthology in 1994, followed by a small black and white album at Le Cycliste. He worked on the animated film Bamboo Bears before joining Delcourt publishers, where he began the Troll series with Joann Sfar and Jean-David Morvan. In 2001, he produced Anges with writer Dieter, as well as creating The Book of Jack and The Book of Sam with writer Denis-Pierre Filippi.