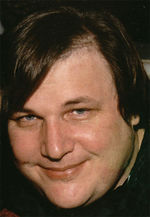 After a stint in the Air Force, James Hudnall became a computer programmer and only realized his life-long desire to become a writer in 1986 when he sold his first comic series Espers, drawn by David Lloyd of V for Vendetta fame. Afterwards he was hired at Marvel and DC, succeeding Peter B. Gillis and Brent Anderson on science fiction comic book series Strikeforce: Morituri and had a run on Alpha Flight. He created 1990s miniseries The Psycho with Dan Brereton and the Eisner-nominated Sinking with Rob Ortaleza. His comics series Harsh Realm, with Andrew Paquette, was made into a TV series on FOX. His current projects are Agenda! with Matt Cossin and Blue Cat, an online graphic novel. The Psycho is in development at Universal Pictures as a motion picture.