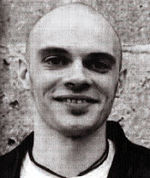 Born in 1973, Manuel Bichebois is a French comic book writer. Wishing to work in the video game world, he joined Kalisto Entertainment in 1997, where he was a graphic designer and writer until 2002. There he met Didier Poli, with whom he collaborated on the steampunk heroic fantasy series The Child of the Storm. Afterward, he wrote and directed his first short film, Bonne Nuit Mon Amour. He later followed up with a sequel entitled The Prince of the Storm, with a new artist.