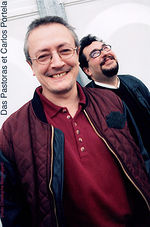 Born in 1956, Julio Martínez Pérez is a Spanish comic artist who works under the pen name Das Pastoras. He published his first professional work in a special 1983 issue of El Víbora and co-founded the fanzine Zero, which published other renowned artists of his generation. In 2007 he was hired to draw Castaka, a new cycle of Alexandro Jodorowsky's Metabarons saga. In addition to the French market, Das Pastoras has been working for US comic books since the late 2000s.