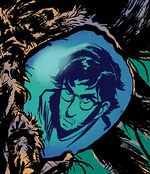 Matías Bergara, born in 1984, is Uruguayan video game designer, comic book writer and artist. In 2010, he began publishing the comic El Viejo, written by Alceo Thrasyvoulou, which won the Troféu HQ Mix, the biggest prize in Brazilian comics. Since 2013, he has worked almost exclusively for the international market, including Sons Of Anarchy for BOOM!, Dengue for Humanoids, Sons of The Devil for Image Comics, and American Vampire: Second Cycle for DC/Vertigo. He also illustrated a children 's book by Neil Gaiman, Odd and the Frost Giants in 2015. He was awarded the Legion Book Award in 2015 by the Uruguayan Book Chamber.