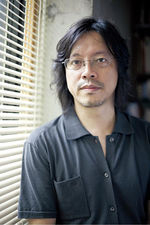 Naoki Urasawa is a critically acclaimed manga artist who is noted for his psychological storytelling and detailed artwork. After receiving the Shogakukan award for New Comic Artist in 1982, he made his professional debut in 1984 with Beta!! Two of his most famous works include for the series 20th Century Boys and Monster  between 1995-2001.

He is also the host of Japanese documentary series Manben, where he and a crew film a manga artist’s workspace.