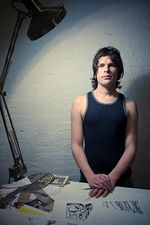 Born in Ohio, Paul Pope became interested in European comics through Heavy Metal magazine. He is one of the few American cartoonists working for a major Japanese manga publisher since he created the series Supertrouble for Kodansha. Since 1997, he has also been working for DC Comics, where his titles include Hellblazer, the miniseries Batman Year 100, and Strange Adventures in the series Wednesday Comics.  His science fiction series Heavy Liquid appeared in 1999 from DC/Vertigo.