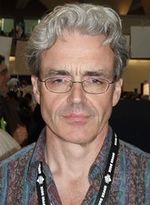 Eddie Campbell was born in Glasgow, Scotland, but now lives in Australia. He began his career in the alternative comix scene of the 1970s and 1980s. He wrote Lucifer, illustrated by Phill Elliot and Paul Grist, as well as Hellblazer drawn by Sean Phillips at DC/Vertigo. He is most known for drawing From Hell, written by Alan Moore, which speculated about the identity of Jack the Ripper. It won the Ignatz Award for "Outstanding Graphic Novel Or Collection" at the Small Press Expo 2000 and the Eisner Award for Best Graphic Album (Reprint), and was adapted into a movie in 2001.