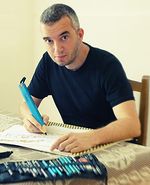 Born in what was formerly known as Yugoslavia, Milan Jovanovic became interested in comics at age 13 and published his first stories in the late 1980s. After studying graphic design, he worked at an animation studio as well as in advertising. In 2001, he co-founded the comics magazine Bager and collaborated with writer Frank Giroud on The Snake in the Ice in the series Secrets at Dupuis. He joined the Carthago series on the third book, collaborating with Christophe Bec. He now lives in Belgrade, where the French Institute held an exhibition of his work in April 2016.