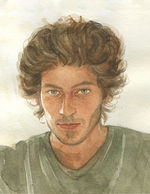 Corentin Rouge was born in 1983, the son of comic artist Michel Rouge, who named him after Cuvelier's famous comic book hero. He studied animation and film at the Academy of Decorative Arts in Paris, and published his first comic story in Métal Hurlant in 2003. He learned the comics profession from his father, whom he has assisted on the coloring of series like Shimon de Samarie and Le Samaritain since 2005. He made his debut together with writer Sam Timel in the crime series Milan K. published in 2009.