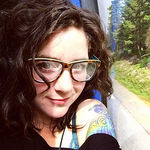 Helen Mullane began her career in film distribution, managing the release of titles for the likes of Studio Canal and EOne. Later she produced the feature documentary FUTURESHOCK! THE STORY OF 2000AD and various shorts such as the multi-award-winning NASTY.

Helen currently resides in northern Sweden where she balances writing and producing with sled dog training and racing.