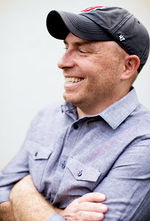 Paul Downs is a screenwriter, animator and educator with seventeen years of experience spanning film, commercial and video game production.

Paul lives in Florida, with his wife Jen and their two children, where he teaches Story/Animation at Ringling College of Art and Design.