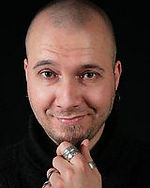 Stéphane Louis is a comics writer and illustrator. Passionate and hands-on, he was first a teacher for eight years, then began illustrating for board games before collaborating on several fanzines and magazines such as Semic, Comic Box, Bugs Bunny Mag. In 2004 he illustrated Tessa: Intergalactic Agent for Soleil. In 2011, he began working on several series, including Khaal where he collaborated in illustration with Valentin Secher. In 2014, he pitched the concept for Sole Survivor to Humanoids, which has been realized with the help of Christophe Martinolli and Thomas Martinetti.