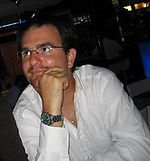 Originally from Nice, Thomas Martinetti graduated from the International School of Audiovisual Creation and Direction in 2002.

He quickly became a writer, producer and director for several production companies before putting his acting skills to use in the production of many short films like Boomer, the clip On tour with singer Wyclef Jean and various films like Frontier(s) and Our Women of Richard Berry.

In 2013, he co-signed with his collaborator and friend Christophe Martinolli to write the three volumes of Sole Survivor (Seul Survivant), published by Les Humanoïdes Associés. Today, Christophe and Thomas are working on their next comic book, and began writing an episode of Season 3 of the judicial series "LEBOWITZ VS LEBOWITZ" broadcast on France 2.