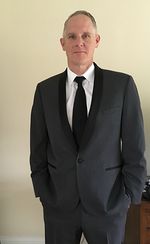 Quinton was born and raised in Texas. After considering a career as a painter, he decided on film school and attended the American Film Institute in Los Angeles. While there, he wrote the film An Ambush Of Ghosts, which premiered at Sundance in 1993. He has written studio and independent features, television movies and hour-long dramas. Currently he is an executive producer and writer on Marvel’s Runaways. In addition to screenwriting, he has directed two independent features, television commercials and a web series.