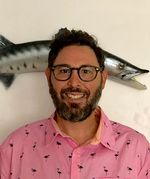 Jonathan Lang was born in Liege, Belgium. He is a comic writer and filmmaker. He began his writing career as a film critic for the Miami New Times. His short film, The Showing, received a Van Gogh Award for directing at the 2015 Amsterdam International Film Festival.  A Miami native, he grew up fishing and diving in Islamorada. As a child, he was regaled by stories of his grandfather working as a numbers runner for “Tough Jews,” Murder, Inc. He conceived of Meyer while volunteering as a companion to a 101-year-old resident in a retirement home. He is the writer/co-creator of the critically acclaimed, Feeding Ground (Archaia), which was optioned by Pressman Films in 2014. He was a contributor to Occupy Comics (Black Mask). He has written for IDW’s Garbage Pail Kids, and lived his childhood dream of creating a GPK. His miniseries Plunder was published by BOOM! in 2015. He is a Brooklyn transplant now living in Los Angeles.