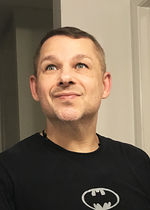 To make a long story short…

Philippe Briones is a French Artist who first started his career at Disney animation Studios, where he contributed to 9 movies over a decade (Hercules, Tarzan, Kuzco, Emperor’s New Groove…).

His French career as an author started with successful titles such as La Geste des Chevaliers Dragons and Kookaburra. He has released about fifteen titles in Europe.

His first US comics contract was signed with Marvel. He worked on Iconic characters such as Iron-Man, Spiderman, X-Men, or Captain America. He was then approached by DC Comics to work on ongoing series such as Suicide Squad, Aquaman, Batman Detective Comics or Justice League and Justice League Odyssey.