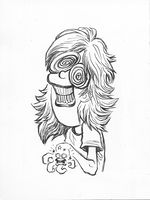 Carla Speed McNeil was born and raised in southern Louisiana, which is a world apart from the Deep South, in turn a strange world within the U.S., which only thinks it's not part of the wonderfully strange world we all live in. She reads a lot and makes stuff up and gets it all wrong, which is why she writes fiction.