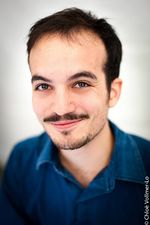 Born in 1991, Vincent Caut was recognized very early on for his talent. In 2008, at the age of 17, he received the Angoulême Grand Prize for school comic books, along with several other awards.

For a while, he maintained a blog that followed the daily life of a student—which was compiled and published in 2010, along with several other titles.

Still a student at the Ecole Estienne, he has launched the series Where are you, Leopold? with Michel-Yves Schmitt, which won the Prix des écoles in Angoulême in 2012.