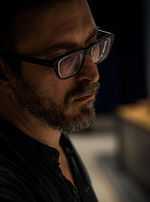 Giuseppe Camuncoli, also known as Cammo, was born in Italy in 1975. He broke out in comics in 1997 with the self-published Bonerest, later translated and published in the U.S. by Image Comics. After a few more Italian productions, he got his first American assignment at the end of 2000 on the pages of Swamp Thing. Since then, he's worked non-stop for DC Comics, Marvel and Image Comics, notably on titles such as Hellblazer, Batman: Europa, All-Star Batman, Daken: Dark Wolverine, Amazing Spider-Man, Superior Spider-Man and Darth Vader: Dark Lord of the Sith. He's also art directing and teaching at the "Scuola Internazionale di Comics" in Reggio Emilia, where he lives with his wife, Jessica, and daughter, Martina.