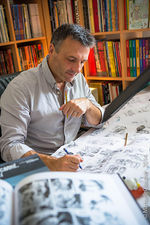 Pascal Bresson was born in Reims in 1969. Driven by drawing since childhood, he decided to start art studies and entered the Conservatory of Dramatic Art in Reims. He began his artistic career at a very young age when he became an illustrator of press articles for the regional daily L'Union at the age of 17.

He then published short stories in various fanzines. In 2000, he experienced his first real success with the Poulpia series written with Brice Tarvel and published by Cœur de Loup editions. He then specialized in children's comics.

His album, Plus fort que la haine, released by Glénat in 2015, won the Public Grand Prize for Best Album, awarded by the Media group MaxEo.

In 2018, he wrote  L'Immortelle, an album retracing the life of Simone Veil, from her childhood to her political struggle. The comic was praised by the press and the public.