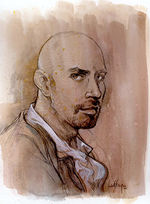 Mathieu Lauffray is a French artist known in the US for Star Wars (Dark Horse) covers and the graphic novel sequel to Treasure Island, Long John Silver. The second volume of the Long John Silver series was chosen for the Official Selection at the Festival d'Angoulême in 2009.  A student of graphic design, Mathieu applies his skills not only to graphic novels, but also film (The Tall Man, Blood: The Last Vampire, 10,000 BC, Brotherhood of the Wolf) and video games (Alone in the Dark).