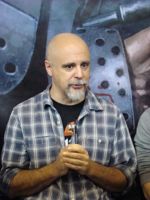 Jerry Frissen (born Thierry Frissen in Belgium) is an American comic book writer and toy & graphic designer. He is the senior graphic designer at Humanoids as well as the author of several best-selling graphic novels, including the anthology comic book series "Lucha Libre" ("Unfabulous Five," "The Tikitis"), "The Zombies That Ate The World" ("The Z Word") and the new cycle of the internationally acclaimed series "The Metabarons," co-written with Alejandro Jodorowsky and illustrated by Valentin Sécher, Niko Henrichon and Esad Ribic, under the title "The Metabaron." In addition to his work on "The Metabaron," Jerry Frissen is also the author of the forthcoming sci-fi thriller "Exo" (March 2018).