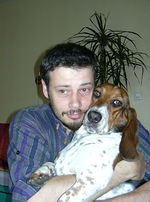 He made his debut in comics after his mother made him create posters of Dardevil and Lucky Luke at the age of 6 years old.

In 1990 at 16, he entered the Emile Colh School of Art in Lyon where, after 5 years of study, he graduated in illustration.

Conscientious objector for two years at Folimage (Valence) as assistant animator, then return to Lyon with Doki-Denki as 2D-3D graphic designer, and finally 1 year in the same position and in the same field at Phoenix Interactive before to finally leaped into the world of comics.

In 2005, his first album was released in September with Humanoïdes Associés. The Orphan of Maelmordha is the first volume in a new series, Antarcidès, whose screenplay is by Alain Paris.