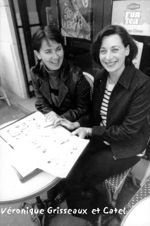 Catherine Muller, known as Catel, is a French writer and artist. She graduated from the School of Decorative Arts in Strasbourg. She began her career in children's books, but branched out into adult media by writing for the television show A Guy, A Girl, as well as her series Bluesy Lucy with writer Véronique Grisseaux, which she calls "the French Bridget Jones". Catel has created or co-created several comics biographies about famous or important women, such as Kiki de Montparnasse. She received the 2013 Prix Artémisia for exceptional comics work by women.