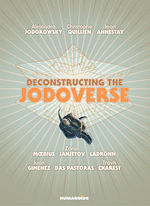 Lift the veil on the incredible Sci-Fi universe, full of love, revenge, intrigue, betrayal, and redemption: THE JODOVERSE — created by visionary Alejandro Jodorowsky.

Book One contains DECONSTRUCTING THE INCAL which includes revealing text and rare preliminary illustrations, as well as the original 56 pages drawn by Mœbius of the unfinished first version of the sequel story (AFTER THE INCAL).

Book Two will feature the second reference guide to the Jodoverse, DECONSTRUCTING THE METABARONS, and WEAPONS OF THE METABARON, the seminal series' spin-off story recounting how the mightiest warrior in the universe built his arsenal of war and featuring A-list comics star Travis Charest's (Wildcats, WildC.A.T.s/X-Men: The Golden Age, and Star Wars comics covers) interpretation of The Metabarons' mythology.