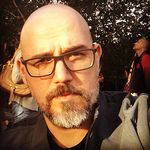 Ilias Kyriazis is based in Athens, Greece. He has been writing and drawing comics since 2001.

Before 2008 he was being published in Greece, winning Greek Comic Awards for Best Artist, Best Writer, Best Comic numerous times. Since then he's been working mainly for American publishers.