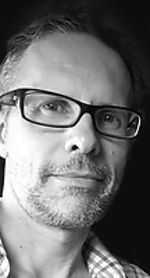 After fifteen years of management consulting, Etienne Appert decided to reconcile his artistic vocation with his professional expertise: in 2010, he became a "designer consultant" for the business world at the same time as being a graphic novel author.

In 2011, he published his first graphic novel, La Femme de l'Ogre, at La Boîte à Bulles, a first graphic novel about the life that the ogre's wife had to endure in Little Thumb. He followed in 2012 with Lehman, the crisis and me, a fair and sensitive transcription of corporate life and the consequences of the 2009 crisis.

He has since collaborated on numerous works for the Flammarion, Nathan, Eyrolles and Hachette editions. He notably illustrated the world bestseller Reinventing organizations by Frédéric Laloux (100,000 copies sold).

He returns in 2020 with River of Ink, an album with dreamlike illustrations in which he sets out to tell the story of the drawing and to answer the question: "Why are you drawing?"