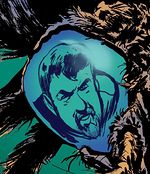 Rodolfo Santullo is a Mexican-born Uruguayan writer, journalist, comic book writer, and editor. He was awarded the Solano López Prize for best writing for his graphic novel Cena con Amigos and in 2008, he was awarded a grant by the Ministry of Education and Culture of Montevideo. In 2009 he shared the First Prize in the JC Onetti Contest with the comic book artist Matías Bergara. In 2015, his comic Dengue was published by Humanoids and Forty Coffins by Space Goat Publishing.