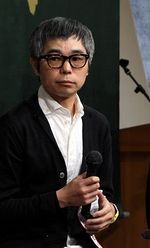 Although Taiyo Matsumoto initially dreamed of being a professional soccer player, he eventually chose to pursue the arts. He gained his first success through a Comic Open contest. His love for sports influenced the subject matter of many of his comics, such as his manga Ping Pong, which was adapted to a 2002 live-action film and a 2014 anime series. He is also known for his Tekkonkinkurito trilogy which began in 1993, and was later adapted to a play for the theater.