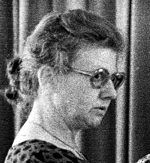 While her body of work features ground-breaking, colorful, and unique stories, French author Eliane Grimaître (1929-1985) remained ever-enigmatic, keping her identity secret throughout her career by using psuedonyms and staying out of the limelight.

From 1956 to 1963, readers of classic Science Fiction anthologies Galaxie, Fiction, Satellite, and Ailleurs discovered the works of a certain Julia Verlanger. Of the 20 or so short stories written by Verlanger during this period, the most memorable are La Fille de l'Eau (The Water Girl), Les Derniers Jours (The Last Days), and La Fenêtre (The Window). Yet after this flurry of activity — which readers avidly responded to —, for reasons unknown, the mysterious novelist would not publish again for some fifteen years.

Readers had to wait until 1976 for her name to reappear, when the publisher Masque released two Verlanger novels: Les Portes Sans Retour (The Doors of No Return) and La Flûte de Verre Froid (The Cold Glass Flute). That same year, in its beloved Anticipation collection, the Fleuve Noir imprint published L'Autoroute Sauvage (Savage Highway), by a certain Gilles Thomas. This post-apocalyptic trilogy proved to be a great success. It was only natural that its author, none other than Eliane, chose to maintain this latest nom de plume (a masculine name was at the time much more accepted in the field), and embark on a second writing career. Under the name of Gilles Thomas, Eliane would become very prolific, penning three to four novels a year, including La Croix des Décastés (The Outcast's Cross), La Mort en Billes (The Marbled Death), Les Voies d'Almagiel (The Ways of Almagiel), and Horlemonde (Retroworld).

In honour of his late wife, Jean-Pierre Tâïeb created the prestigious Julia Verlanger Prize in 1986. Julia Verlanger left an indelible mark on the world of popular literature, and her titular prize is awarded to science fiction or fantasy novels that best emulate her success.

Her work lives on in other mediums. In 2008, Humanoids, along with writer Patrick Galliano and artists Cédric Peyravernay and Bazal (Redhand) joined forces to create a graphic novel adaptation of Retroworld. Savage Highway is also being adapated for the graphic novel medium, as well as the big screen, with production of the film scheduled for 2017 and release of the graphic novel for Spring 2017, with writing and drawing responsibilities taken up by Mathieu Masmondet and Zhang Xiaoyu (Crusades) respectively. And the most recent Verlanger novel undergoing comic book adaptation is The Outcast's Cross (as Orion's Outcasts), which is due in mid-2017, from scribe Eric Corbeyran (The Bombyce Network) and artist Jorge Miguel (Balkans Arena, The Z Word).