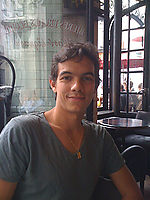 Clement Baloup entered Angoulême’s prestigious Beaux-Arts Program in 1997 and spent the next five years enriching both his perception and practice of sequential storytelling. In 2004 he published his first comic book, Autumn in Hanoi, a mix of travel log and short stories.

Clement has gone on to become a versatile creator: besides his more personal graphic novels (the Vietnamese Memories trilogy) which he both wrote and illustrated, he has written stories in a variety of genres, illustrated by other artists such as Chinh Tri (Le Seuil), La Concubine Rouge (Gallimard), both with Mathieu Jiro, Suicide Club (Soleil) with Eddy Vaccaro, or Le ventre de la Hyène (Lombard) with Chris Alliel, to name a few. His work has been translated into English, Spanish, Italian, German and can be regularly found in magazines as XXI (France) or Internazionale (Italy). Additionally, his works as a fine artist have entered several private and public collections around the world (Marseille, Paris, Bruxelles, Dubaï and London).

Clement was awarded numerous prizes for his series Vietnamese Memories, including the Jury’s Choice Prize at the 2011 Angoulême International Comics Festival and the Doctors Without Borders Prize in Clermont-Ferrand.