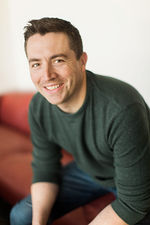 Nick Bruno is an American Film Director and Animator at Blue Sky Studios, who in 2019 will make his Directorial debut with the animated Spies in Disguise.

Bruno was born and raised in Mohegan Lake, NY, USA, where, at an early age, he learned he could combine his love for drawing and filmmaking by pursuing a career in animation. He studied illustration and the fine arts at UMass Dartmouth, and went on to receive his Masters at NYU studying computer animation.  In 2005, Bruno joined Blue Sky Studios as a Junior Animator on the feature film Ice Age: The Meltdown.

Most recently, Bruno served as Supervising Animator on The Peanuts Movie and in 2015, VARIETY named Bruno one of their “Ten Animators to Watch.”

In addition to animating, Nick has developed films at 20th Century Fox and has co-written a live-action family film being produced by Smart Entertainment (Ted, Blades of Glory, Anger Management).

Bruno resides in his hometown, with his wife Allison and their three children.