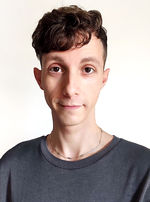 Gegê Schall is an artist/writer from São Paulo, Brasil, whose works have been published by BOOM! Studios, Image Comics, Dark Horse, IDW, Humanoids Inc. and others. Their latest works include Made In Korea (Image Comics), Better Angels (BOOM! Studios) and Chasing Echoes (Humanoids Inc).