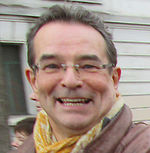 Patrice Guillon is a writer, draftsman and colorist who got his start in the comic industry a bit later in life. He first published "Kat Ogan," a strip illustrated by Stéphane Abadie, in Mon Quotidien, a newspaper for teens, in the years 1996-1997.

He then went on to write: Guide de la cinquantaine (Guide to the Fifties), drawn by Tépaz for Winds of West; Une passion cubaine (A Cuban Passion), a commercial album drawn by Loustal, published in 2006; Dans la secte (In the Sect), a testimony on Scientology, under the pseudonym of Pierre Henri (The Bubble Box, Prix de la BD citoyenne), illustrated by Louis Alloing; and Mes Copains d'autrefois, (My Buddies of Yore), for Benjamin Bouchet.

Eventually, Patrice paired up with his daughter to co-script the intimate and tragic Journal d'une bipolaire (States of Mind), for which they employed Sebastien Samson's illustrative talents.

He then delved into more humorous material with Les Comptables and The Colleagues, which are personal works inspired by his past experiences as a designer in an advertising agency.

For his most recent title, Un Juste, he interviewed David Cénou's father at length to accurately trace the story of his great-grandfather during the German occupation.