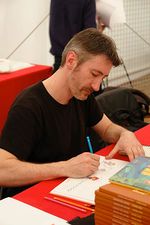 Though born in Bordeaux in 1968, Michel-Yves Schmitt spent all his childhood and even extends his studies in Nantes, before he left the oceanside to go to Paris where he worked as a graphic designer and contributed cartoons to the fanzine Beurk.

In 1999, he decided to start his own business and, since then, has worked mainly for professional journals. In 2001, he responded to an ad on the internet asking for comic illustrator. This led to his first comics, Sweet Potato and Dérives, and later, more personal works such as So Dance and My Life As an Adult, before partnering up with Vincent Caut for Where are you, Léopold?