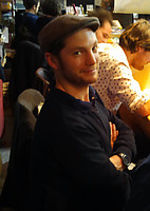 Originally from the Grenoble region, Olivier Perret ("Pero") attended the School of Fine Arts of Tournai. After his artistic studies, the young Pero began investing his body and soul into the creation and animation of the magazine Cheval de four.

He has participated in the collectives of Mickael Jackson (Small to Small) and Envie de Strawberry 2 (Oro production). In 2010, he signed his first non-collective book, Un jour sans, published by Ankama. Though still a relatively new author, he already exhibits a mastery of the graphic and narrative art form—a talent that is confirmed in Dog Days.